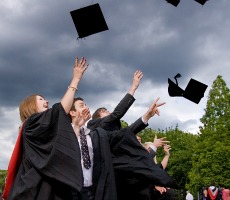 Three-quarters of the public want to keep the number of international students coming to Britain the same as now or to increase it, according to new ICM polling for British Future, writes Steve Ballinger.

The findings are released as the Government announced a new Migration Advisory Committee inquiry into the broad impacts of international students on universities and local economies, alongside new ONS immigration statistics today.

The MAC inquiry is welcome and long overdue, bringing new evidence to the debate on whether international students should be reported separately from other migration figures. There is consensus among the public and most politicians that overseas students should be welcomed in Britain but currently, the net migration target creates a perverse incentive to cut student numbers.

People have very different opinions about different types of immigration, such as students and other flows, and it would make sense if our policies and targets reflected this. Replacing the net migration target with a series of ‘intelligent targets’ that differentiate between different flows of immigration, would be a sensible move as part of post-Brexit immigration reforms.The one-size-fits-all net migration target isn’t fit for purpose now and won’t be after we leave the EU

ICM’s polling for British Future’s forthcoming report finds that only 12% of the public – and just 14% of Conservative voters – think that the Government will meet its net migration target in the next five years. Two-thirds of the public (66%) and 62% of Conservatives believe it won’t be met by 2022, well after the UK has left the EU and freedom of movement has ended.

The research also finds that nearly two-thirds (63%) of the public, and 71% of 2017 Conservative voters, think the Government should drop its headline net migration target and replace it with separate targets for different types of immigration, such as skilled and low-skilled workers. Just 7% of the public disagrees.