Modern Britain has provided a vibrant canvas for young British Chinese to explore their identity. This can be seen through their leisure pursuits, which present an interesting hybrid. While Hong Kong culture remains important, due to the migration history of the majority of British Chinese families, living and growing up in the UK has more than made its mark, and the importance of media from mainland China, Korea and Japan is growing, writes Dr Alex Tan, who recently completed a thesis on youth experiences of British Chinese in the northeast.

In comparison to their parents, young British Chinese have a better grasp of the English language, and have more exposure to the various cultural outlets and experiences enjoyed by other young people in the UK. They often watch the same popular TV shows and blockbusters as their non-Chinese counterparts, thus creating a sense of belonging in the country. 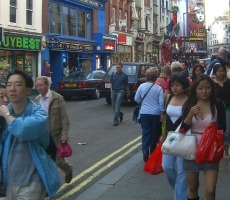 At the same time, Asian cultural outlets are still a big feature, creating an interesting fusion of cultures. The nature of this has changed over time. For the 20 somethings of today, many have memories of a childhood spent watching TVB, a Chinese satellite channel available in the UK. This channel brought Chinese language entertainment and news to many homes that had parents from Hong Kong.

Recently, with the rise of China on the world stage and the internet, Chinese language material has become openly available. Mandarin language media is finding its way into homes in the UK too, and Mandarin language itself is becoming increasingly important for British Chinese. Due to the heritage of Chinese people in the UK, and the part that transnational links and influences play, values and reference points have changed.

Interestingly, it is not just English and Chinese cultures that are fusing. Korean and Japanese media have a following amongst many young people in the UK and are not restricted to one ethnic group. Contemporary entertainments such as Korean dramas and Japanese anime have gained popularity and impacted on the identity of young British Chinese.

All of this is not a one-way street of course, but rather an exchange of cultures. The growth of karaoke near me booths and continued popularity of Chinatowns in the UK, with their shift from just food centres towards entertainment and services, influences a sense of Chinese and Asian culture for all living in the UK, not just those of a specific ethnic group.

So how does a Chinese heritage and leisure interest affect a sense of identity? If we are talking about feeling British we should consider the importance of varying experiences in time, space and place. Compared to their parents, young British Chinese fit in more comfortably from having the social skills and understanding of culture in the UK. They have their own relationships, meaning investment in the country. There may also be attachment to culture and people outside the UK; this can give a different worldview and set of interests, but does not in itself mean detachment or alienation.

Whilst British-born Chinese enjoy a range of hobbies that cannot be considered ‘Chinese’, it is also difficult to categorise all their interests as specifically ‘English’. Many grew up with parents from a different cultural background and may therefore know a different range of stories, entertainments, customs and interests. Individuals may identify most closely with their family, but as they grew up in the UK they are likely to know a range of people from school and the local community. There are undoubtedly experiences of not fitting in too; examples of racism at school or in the takeaway.

As young adults, those at university and away from home have had a much greater chance of meeting both other Chinese and English students, which further enables exploration of identity. All of this has then impacted on the terms they use to describe themselves. ‘BBC’ remains a popular term for many young British Chinese, but this refers specifically to British-born Chinese. There are a whole group of who self-identify as both British and Chinese, who were either born abroad, only spent their childhood here or may have moved more recently as short term workers, students and professionals. For those raised at some stage in the UK ‘British Chinese’ is arguably a broader and more fitting term then. More British Chinese are also calling themselves ‘Asian’.

Dr Alex Tan is a human geography researcher. His recently completed thesis, British Chinese Youth Transitions (Newcastle University, 2013), is a study into the significance of youth experiences for young British Chinese in Newcastle upon Tyne.