As the NHS prepares to celebrate its 65th birthday, I’m reminded of how many of my own birthdays I celebrated at Pilgrim hospital in Boston, Lincolnshire, writes Douglas Jefferson, whose story of the first few weeks of his life in hospital offers a shining example of the efficacy of the NHS. 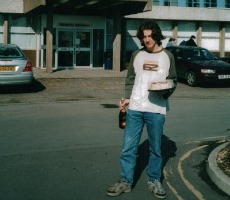 Douglas Jefferson outside the Pilgrim hospital in Boston, Lincolnshire, on his 18th birthday

In 1986 I was born 13 weeks premature by emergency caesarean. Normally parents get to hold their babies as they enter the outside world, but for my parents they could only stare at me in a box. Normally they can hear their child cry and breathe; my parents could hear only silence punctuated by the regular bleep of a heart monitor. Thanks to significant advances it is almost routine for children born as early as myself to survive. In fact, seven out of 10 do, but the odds were not as much in my favour back then.

Despite a bleak outlook numerous doctors and nurses worked hard, resulting in my condition stabilising within a few weeks. However, it was a while before I was out of the woods. I had developed a hernia and once again was in need of urgent treatment. The doctors at Pilgrim had to move me on to the care of Leela Kapila, a renowned specialist, who saved my life.

My family never forgot the actions of the staff at the Pilgrim, and particularly Kapila. And so, every year on my birthday, my parents and I became pilgrims ourselves, visiting the team at the hospital and presenting them with a birthday cake to say thank you.

I cannot begin to calculate the cost of all the doctors, nurses and medical equipment required to treat me in those early weeks, but I’m fairly sure I am still in arrears. So many of us owe our lives to the NHS and I certainly do, yet too often we can take it for granted. Indeed I often did myself as I complained about spending my birthday in a maternity ward rather than a theme park.

Regular newspaper headlines will highlight poor performing hospitals, while statistics will tell us about increased rates of infections or waiting times. However, my experience of the NHS is very much a positive, happy story, which is also the case for plenty of others.

As the NHS turns 65, I am once again reminded that it is an institution I am incredibly proud of, as well as thankful for. As a result it’s a good time to reflect on our own stories with the NHS and to thank all the people who keep it running every day, helping people of all ages and welcoming new generations into the NHS. While I no longer bake birthday cakes, I am still just as thankful to the NHS and all the people who contribute to it.

Read our new report on the NHS at 65 here.