Now in its second year, the Big Bookend festival in Leeds is a fantastic weekend celebrating the written word. The book festival brings together writers old and new and describes itself as a “rock festival for words.”  Over the course of a month – with the main events taking place over a weekend – the varied programme had something for everyone with kid’s events and “big kids” events too.  The most encouraging thing was the celebration of writers from the past, with the present and future being well represented too, reflects Matthew Rhodes on a fascinating weekend in his home town. 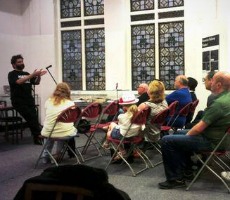 The weekend saw the launch of a Leeds anthology – LS13 – highlighting a new generation of the best writers under the age of 40 in Leeds – and culminated with a recital at the West Yorkshire Playhouse by the multiple prize winning Tony Harrison, considered by many (including myself) to be the UK’s greatest living poet (see below for a brief interview with Harrison).

However, unlike other cities this heritage has arguably not been fully recognised – and has even been dismissed – by those who see it as a literary provincial backwater. One of the current crop of Leeds’ writers, Anthony Clavane, recently leapt to the defence of his beloved Leeds when the editor of Granta magazine referred to Leeds as an apparently unfashionable northern city, with little to recommend it in literary circles.

One of the brightest new talents to emerge from the Leeds scene in the last couple of years, disproving this opinion, is Wes Brown. His first novel Shark tells the story of John Usher, an ex-squaddie from Leeds, who returns to his neighbourhood after fighting in Iraq and quickly finds himself embroiled in local conflict, especially with the local Pakistani population.

Brown uses his Leeds background to draw out some of the earthier, darker sides of working class life in Leeds, and makes extensive use of the Leeds dialect to powerful effect.  There are shades in the book, but overwhelmingly it depicts John’s Leeds as a place where people find themselves simply existing rather than flourishing.

At the very youthful end The Leeds Young Authors provided a showcase of the kind of work they have been producing under the tutelage of Khadijah Ibrahiim, with several (aged 14-18) reciting some of their poetry ahead of Harrison’s recital.

Tony Harrison’s work initially inspired my interest in poetry, especially his Leeds based work which so evocatively draws on his experience of growing up in working class Beeston (where the past three generations of my family are from). The poems from his renowned collection The School of Eloquence beautifully and tragically draw out the conflicted emotions Harrison has battled with all his life about the distance that grew, in particular between him, his parents and his background. His talent, ability to learn and the education which took him away from Leeds meant that, as his elegiac poem Book Ends concludes, all that was eventually between Harrison and his family was “books, books, books.”

In his magnum opus narrative poem V Harrison rehearses a mythical dialogue between himself and a Leeds United hooligan, upon his discovery that his parent’s grave has been graffitied. Reflecting on issues of identity, belonging, social mobility, dislocation and meaning, Harrison uniquely captures the confusion produced by a life of change, but also the fact that he never could stop writing about his roots – in Beeston, in Leeds, in Yorkshire.

As I sped back to London on the train yesterday, past Beeston & Elland Road (where in Harrison’s words “Leeds United play, and disappoint their fans, week after week”) I once again thought about my roots and sense of belonging. Like Tony Harrison my connection with Beeston is now less physical, my last grandparent having passed away in 2009, but it is no less visceral. Every time I walk down the hill to Elland Road, past Beeston St Anthony’s ground with my Leeds scarf on, it pulsates through me again and I know that I belong, that I am not rootless.

The Leeds Big Bookend festival once again stirred some powerful emotions in me and I am certain that it did in others too. In the end writing that is connected and rooted in a place is a means by which connections can be “felt” and lived rather than just acknowledged.

I am already looking forward to next year’s festival.

Watch highlights from the event below, alongside an exclusive interview with Tony Harrison.