Supporting the success of young people 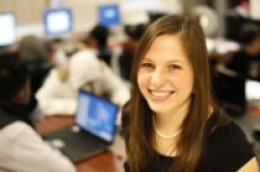 The challenges of unemployment and rising living costs can be particularly damaging to young people. Providing them with support is essential and effective, argues Sarah Webster.

At City Gateway, I work with some of the toughest young people from the seemingly hopeless estates in Tower Hamlets.  Each day we deal with cases of physical or sexual abuse, homelessness, illness and bereavements as well as concerning CRB checks.  They have been written off by their teachers and would be considered unemployable (usually having less than 5 GCSEs). Yet when given education, support and encouragement – with the end goal being a link with job opportunities in city firms through our apprenticeship programme – they are transformed.

Abul had been to our youth club since he was 15 years old but he spent the best part of his late teens in young offenders institutes and was known as one of the most dangerous young offenders from Tower Hamlets, frequently being moved from one prison to another.  Life hit a particular low point when he was living on the streets, during which time prison was considered a welcome retreat.  Fortunately he was referred to City Gateway and within 6 months he had achieved higher qualifications than he had ever done before.  He was also employed by a leading city gym.  To see him up in front of over 100 people sharing his story, it is truly difficult to believe just how far he has come.

Another young lady, Jenny, came to us age 17, having been put into a ‘pupil referral unit’ for difficult or excluded children, age 11.  In the years following she had achieved just 5 low GCSEs by the time she left.  She lost her brother quite tragically just after she started with us and while this meant her behaviour was at times challenging, we were not going to give up on this very bright and capable young lady.  Over the coming months and through a chance conversation with one of our corporate volunteers, she discovered an interest in HR.  She then applied for an apprenticeship work placement with Canary Wharf Group in the personnel team, which she was successful in securing.  She was the only person in her family with a job.  Five months later they hired her directly and in her review I was informed she was explaining things to the graduates and was a truly indispensable member of the team.  She is now planning to go back to college and university, with the long-term plan to study for her Chartered Institute of Personnel and Development qualification.

What is the difference the day they walk in to us compared to the day they walk into their job, some 3 – 6 months later?  Confidence.  How have they gained it?  They keep hearing how great they are, they keep being encouraged by the many different people who interact with them.  We hold graduations for each group to recognise their success. We use every opportunity to reward them for what they have achieved.  Even when their behaviour is challenging we will find the one positive aspect and praise it.  Suddenly these young people believe they have something to offer the world. I strongly believe we can apply similar principles throughout our society, in all of our workplaces, in all of our homes.  If all of us Brits start to believe we have something to offer the world, I think you might just find we do.

It is not an easy road ahead for these young people and unfortunately at City Gateway we can only work with several hundred a year, while Britain has a national crisis of over 1 million young people out of employment.   They face the short term challenges of surviving on the apprenticeship minimum wage (£2.60 per hour) alongside ever increasing travel costs, increases in rent and cuts to housing benefit and support services being slashed.  Across the country young people face an uninspiring future with graduates ‘lucky’ to be in jobs that often lack any future prospects, and for which they are hugely over qualified.  However what we need is enterprising young people, with nothing to lose and everything to gain, to be brave in these times and to have the support to establish new businesses and develop new ideas.  Sure, life will not be as easy as it may have been for the previous generation, but there is a future to be fought for.  What is critical is that these 1 million young people who are unemployed do not turn into 1 million adults who are unemployed. Businesses must engage with these young people to boost their confidence and their employability skills, to ensure they are well positioned to enter the labour market as the jobs are created and the economy recovers.  It is in all of our interests to do this and you too can act to help.