Scottish and British: why Andy Murray brings a fragmenting UK together

It is a sign of the health and maturity of civic Scottish nationalism that sport matters so much less to nationhood than it did a generation ago, writes Sunder Katwala.

It is a second successive Wimbledon final for Andy Murray. Now only world number one Novak Dvokovic, as formidable an opponent as Roger Federer last year, stands in the way of Murray completing the quest for that most elusive of sporting holy grails, seeking to become the first British Wimbledon men’s singles champion since Fred Perry’s 1930s triumphs. Scotland has waited even longer. Most people think Murray would be the first Scot to win the men’s singles, though it was discovered a couple of years ago that the Irish 1896 champion Harold Mahony was Edinburgh-born. 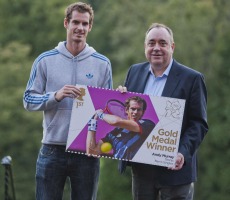 Murray is the most talented British player for decades, and the greatest Scot to ever pick up a tennis racket, his Wimbledon final does have a distinctive ability to bring a fragmenting United Kingdom together. That is captured in striking Wimbledon viewing figures, provided by BBC Scotland to the think-tank British Future. His 2012 Wimbledon final had a peak audience of 16.5 million, including 1.5 million in Scotland. That was a TV viewing share of 64%, reaching as high as 72% north of the border, involving almost one in three of the entire population. The final averaged 13.5 million, including 1.3 million in Scotland. By contrast, the 2011 final – Federer versus Dvokovic – had an average audience of 5.5 million, including under half a million Scots, and a peak of 8.8 million (790,000 in Scotland). The 2011 Scottish viewing share was, perhaps counterintuitively, still marginally higher, at 47% than the share of 44% across the UK. (The BBC could not provide an England-only breakdown. “There is no BBC England,” we were told).

Wimbledon is a sporting arena which often shows how sport transcends nationality. Its fans embraced Borg and McEnroe, Becker and Graf, Federer and Nadal. This reflects the ethos of a sport which, like cricket, cherishes a cosmopolitan spirit of fair play over more tribal rivalries. Yet this has depended, too, on a more contingent factor, the hopelessness of the hosts. The viewing figures show that nationality does matter in tennis too. It engages a much wider public audience beyond tennis afficiandos when there is British participation.

Yet this Wimbledon final could even turn out to be one of the last great British sporting occasions, taking place little more than a year before the Autumn 2014 Scottish independence referendum. Sport has often offered the most popular, public sphere in which notions of identity are played out; where ideas of the nation are contested, and shifts in the question of what it means to be “us” have also been ratified and resolved. But there are three reasons why sporting allegiance looks unlikely to play any central role in the politics of the Scottish independence vote.

Firstly, it is primarily a sign of the health and maturity of civic Scottish nationalism today that sport matters so much less to Scottish nationhood than it did a generation ago. At the nadir of modern Scottish identity, in 1978 and 1979, the two were tightly, and ultimately humiliatingly, intertwined. Scotland had a fantastic football team, capable of beating anyone on their day. The footballing hubris of Argentina 1978 saw Scotland’s World Cup single immortalise Ally McLeod’s infamous boast that he would return with the trophy. Scotland couldn’t beat Iran or Peru though they did beat the great Dutch side in their final game, just to show that they could. This “we were rubbish” football hangover didn’t help in the failure to secure enough votes for devolution in the 1979 referendum.

Scotland routinely qualified for the World Cup, going when England did not. It has little prospect of qualifying for another in the foreseeable future. Yet that matters much less given a much broader Scottish cultural and civic presence today than at the end of the 1970s. (Ipsos-Mori report that support for independence peaked at 47% in April 1998, just before the last Scottish World Cup appearance, but this may be a coincidence rather than a cause).

The second reason is that the United Kingdom has long been able to accomodate a separate Scottish sporting identity. Sport was devolved from the very start. International football was first invented in 1872 with an England v Scotland football match between two nations who shared a state. The growth of Scottish identity has been increasingly recognised. It now seems remarkable that God Save the Queen remained the anthem for Scottish rugby matches at Murrayfield throughout the 1980s. The cacophony of booing was unhealthy for Scotland, for Britain and the monarchy too. Flower of Scotland was finally adopted in 1990.

One significant sporting choice would depend on the referendum result: whether or not Scotland was part of Team GB at the Olympics and Paralympics. Going it alone might well mean more Scottish participants at the event, but probably fewer Scottish medals being won at it. Eleven of the 14 Olympic medals won by Scots in London 2012 were team efforts involving English and Welsh team-mates too. That could be seen as a metaphor for the trade-off involved in the independence choice – the visibility of representation versus the benefits of cooperation.

Outside the Olympics, the nature of Scottish participation in most international sporting events are not at stake. Scotland has competed under its own flag at every Commonwealth Games, since the first Empire Games in 1930. Scottish golfers in the European Ryder Cup team would remain. Both Unionists and civic Nationalists can deploy this example to illustrate wider points: it shows both that the Union can accomodate national aspirations, and that the relationships of a ‘social union’ would survive a change of statehood.

The third reason that sporting identity seems unlikely to shift is that, a year before the vote, independence has now become a more distant prospect. The polls have fluctuated much less than many expected. The punter who walked into a betting shop and put £200,000 on the independence bid being rejected stands to only win £33,000. How close the referendum result is – how the under 40s vote – may well have a significant impact on the prospects of independence within a decade or two, but a Yes victory in 2014 appears beyond the grasp of the SNP.

Would anything be different for Andy Murray at Wimbledon in 2015 and 2016 if Scotland had voted Yes? Would the crowd wave Union Jacks or would they seem out of date? It is hard to know in advance what the psychological impact of independence would turn out to be. Murray’s career has coincided with a reshaping of British identities, particularly a sharp rise in Englishness, as a new IPPR report published on Monday will detail. This may explain why the 19-year-old Murray was subjected to a Tebbit-style “football test” over the 2006 World Cup, when Scotland had not qualified. Traditionally, the English had supported the Scots against non-British sides, while fully aware that ‘anybody but England’ was the dominant, default Scottish position. Refusing to reciprocate the rivalry was also, perhaps, a subtly effective way to annoy the Scots. Post-devolution, confident superiority gave way to grievance, so that it was the English who now sought reciprocity, making support of a Scottish-Brit at Wimbledon somehow dependent on a willingness to cheer for England against Paraguay. (The tabloids invented Murray’s purchase of a Paraguay shirt, and returned to the topic frequently, but Murray diplomatically withdrew his endorsement of England’s opponents as banter.)

The audience for the 2012 final showed that those stale jokes about Murray being Scottish when he wins and British when he loses are well past their sell-by date. Indeed, his emotional response in the post-match interview now ranks with Gazza at Italia 1990 in the pantheon of sporting tears. Alex Salmond needs something dramatic to happen – a couple of breaks of Alistair Darling’s serve at least – if he is to take Scotland’s 2014 vote into a five-set nailbiter. An Andy Murray Wimbledon victory is a rather more immediate prospect. There will be no doubt that he is both Scottish and British when he takes to Centre Court tomorrow. So it is that the burden of ending 77 years of hurt – and perhaps a lesser known 117 for the Scots too – falls squarely on his shoulders.

This article was originally published in the New Statesman on Saturday 6th July.