“The song remains the same and it feels desperately stuck,” writes Chris Creegan as he looks back at the General Election campaign in Scotland 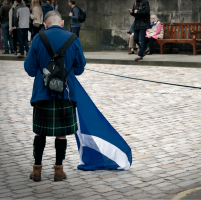 Could Scotland find a new political consensus? That was the question on my mind just two years ago, reflecting for British Future on the 2015 General Election campaign in the wake of the 2014 independence referendum, writes Chris Creegan. It was a tall order given that Scotland had just returned 56 SNP MPs out of 59. But it was a serious question.

Scots have taken part in four nationwide votes in under three years and 2015 feels like a lot longer than two years ago. Yet the lack of consensus in Scotland feels more apparent than ever. The more pressing question now seems to be one I asked just two months ago when Nicola Sturgeon announced that she was seeking a second independence referendum. Can we learn to disagree well?

As the results were declared in the early hours of 9th June, it became clear that the after effects of the 2014 referendum were still reverberating. But if the results themselves confounded the pundits as they did elsewhere in the UK, the political discourse in Scotland during the election hadn’t. And it wasn’t pretty. Whatever ‘twists and turns’ the debate had taken at a UK level, one tweeter commented in the week before polling day, they had distracted from the ‘grim debate’ in Scotland.

I knew what he meant, though as he rightly later qualified, this was to take nothing away from the energy and commitment of activists on the ground across parties who worked tirelessly for votes. And that much they could agree on as the polls closed. But the fact is, Scotland’s debate did feel wretched at times and it’s worth reflecting on why.

A UK election called about Brexit was inevitably going to be about independence in Scotland, not least after Theresa May’s response to Nicola Sturgeon in the wake of Holyrood’s vote a few weeks earlier to pursue a second referendum. And so it proved. Although just as elsewhere activists engaged in a highly targeted core vote strategy, the election here was irresistibly about the fallout from not one referendum but two. More specifically it was about whether there should be another. And to a degree this suited parties and pundits alike.

While the focus of the election down south moved on from its original raison d’etre, in Scotland the shift was markedly more muted. Here, it started with a question about the second independence referendum and that’s where it ended. And however passionate you feel about it in either direction, the debate felt tired and many voters were tired of it too.

In other respects, the big talking points of the Westminster campaigns sometimes felt remote even if they were just as relevant to Scottish voters. The Conservatives’ wobble on social care was a prime example because the issue is devolved to Holyrood. In contrast, education weighed heavily on voters’ minds north of the border despite the fact that it too is a devolved matter. Yet confusingly, it was the record of the SNP government, not up for re-election, which was in the spotlight.

And then there were the two tragic interludes after terror visited Manchester and London. In one sense those shocking moments brought us together at a time when quite different contests were taking place. Scotland stood four square with Manchester and London like everywhere else. For some, the sense of solidarity may even have swayed their feelings about the merits of separation. The constitutional debate has always tugged hearts as well as heads. But in another sense both moments reinforced the sense of distance because policing too is a devolved matter.

So much for policy. At the level of personality too, the election here had distinct voices. The profiles of both Corbyn and May did not feature to the extent that they did south of the border although their fortunes did follow similar trajectories. Not so much the Jeremy and Theresa show for us. More the Nicola, Ruth and Kezia show. And with the volume turned right up at times too.

But it was at the level of discourse that the difference between north and south of the border was most marked. In Scotland, left and right were by no means irrelevant but they sometimes felt like taunts and jibes at the playground’s edge. The big fight around which pundits hovered shouting scrap was that between nationalism and unionism. The snap election didn’t help because tones were already shrill when the election was called and there was little opportunity to regroup and refocus around different agendas.

This was not new of course. The constitution was far from irrelevant in 2015. But the big difference this time was the extent to which the language of unionism as well as nationalism featured in the election’s political lexicon, in large measure a response to events since. People on both sides of the debate have been ruminating on the N word for some time. But the U word was the new kid on the block. And party lines were painfully clearly drawn.

For voters, the loser in all of this is arguably the perceived efficacy of the parliament we already have. Holyrood has become a settled feature of Scottish life with the ability to make a substantial difference to people’s fortunes. Yet there’s no denying the continued focus on the constitution undermines that, whether intentionally or not.

We have able political leaders in Scotland. But there is a concern that their talents are squandered in an increasingly suffocating narrative of binary opposition. Better disagreement would provide some respite. But is there not the basis of just a modicum of consensus? There really ought to be, not least on Brexit, where there is a lot of common ground between the parties in Scotland. The ensuing chaos in Westminster only serves to highlight that.

Will it see the light of day anytime soon? In the absence of more constructive disagreement about the constitution, the prospect seems distant. The 2017 election did feel very different here and so far the fallout does too. The record however is a rerelease. The song remains the same and it feels desperately stuck.

It will take a mixture of realignment, reflection and compromise to get it unstuck. As the lines are redrawn in the wake of the election, none of these seem very evident just yet. Deep breaths, some goodwill and a bit of courage would help. Is that too much to ask?

Chris Creegan blogs at www.chriscreegan.com and Tweets from @Chris_Creegan This post is written in a personal capacity.