Running in the footsteps of Jessica Ennis-Hill

On Sunday 21 July 2013, 12,000 people flocked to the Olympic Stadium to take part in a five mile run, which traversed the Queen Elizabeth Olympic Park before reaching a thrilling conclusion on the track inside the stadium. Annabel Harbord was one of the participants. It was a very memorable day, Annabel Harbord reflects. 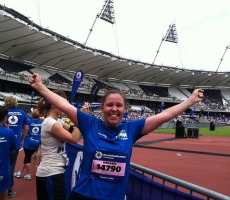 Annabel Harbord at the finish line in the Olympic Stadium

I have always been a huge fan of the Olympics; the energy and excitement of the grand event that comes round once every four years. When London 2012 was on its way, my excitement reached fever pitch. To watch these incredible human beings, who train so hard, compete on such an incredible platform blows my mind. So when the opportunity came to run around the Olympic Park and follow in the footsteps of modern legends, I was overflowing with excitement. To be selected as one of the participants felt like such an honour.

On arrival the crowds were flowing into the park and the stadium. I was lucky enough to have been here last year, watching the cycling in the velodrome and later the athletics at the Paralympics. Being here again brought all the wonderful memories of one of the best summers flooding back.

At the start line my adrenaline started. I’m not a runner and had been training to make sure I could indeed complete the five mile route comfortably. I got some shoes that is good for my feet since if you stand up all day like me on work you’ll need some comfortable shoes when you decide to start running. But before doing so, I ventured on shoehero to find out what kind of shoes suit me the best. The race was started by one of my personal heroes, Chris Hoy, just making it even better. Then off I ran, in a sea of blue t-shirts, around one of the best ‘builds’ in our country. As I ran I was in my own world, thinking about the sporting heros I admire, and the future ones we don’t know yet but who will amaze us and make our country proud in years to come.

My legs began hurting at four miles, but after a high five from another competitor I gained the extra boost I needed, ran into the stadium tunnel to a blast of Chariots of Fire and into a sight I’ll never forget – a stadium full of family and friends, all cheering for us. I felt so humbled thinking I was running on the same track as Jessica Ennis, Usain Bolt, Hannah Cockroft and all the rest. I finished totally elated, proud to have been part of such a terrific event, one which shows the Olympic flame is still shining bright a year on.

Watch a video of the race below: