“We are never going to be ready.” That was the oft-repeated statement in the lead-up to the London Olympics. But the doomsayers were wrong. The Games were a resounding success, delivered on time and to an outstanding level. The general consensus was that London proved an amazing host. How did we pull it off, many have asked? And what has been the legacy of all the hard work? Current exhibition We Made 2012 addresses these questions, writes Jemimah Steinfeld. 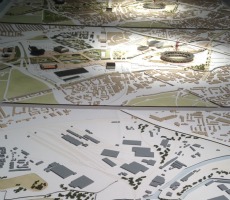 A model of the Olympic area in three sections, before, during and in the future

Over at The Building Centre in central London, We Made 2012 covers how the design and construction industries in the UK worked hard and thought outside the box to produce a truly memorable event. Featuring before and after images of the site, alongside models and videos, the exhibition looks at key challenges met along the way, such as how an area that was previously barren by overcrowded London standards was given an Olympic-standard water supply and transport network.

The buildings were all very impressive but their design was not just to look good. Inclusiveness and accessibility were at the heart of the architecture, as is explained. Green was too, and you can see how London fared in relation to Beijing.

A major highlight of the exhibition definitely goes to the video An Engineer Backstage, which specifically focuses on the opening ceremony. Why it is black and white footage was not entirely clear. Some of the grandeur is lost with that. But it is full of I-never-knew-that type facts. For example, of the hundreds of hospital beds used in the opening ceremony, 300 have been donated to Tunisia.

It’s not a big exhibition and more could have been done to concentrate on the Games’ legacy in London. The exhibition definitely looked back more than it did forward. If you find yourself near Tottenham Court Road though it’s worth dropping in. While you are at it, there are other gems in the space. The large model of London, which feels like it should be accompanied by the Eastenders theme song, is a nice touch.

Jemimah Steinfeld is a freelance journalist in London.