What are the key ingredients used in a garam masala and how readily available are they in Britain? These were questions Mrs Juttla asked when herself and her family moved to London in 1965. . But in her new neighbourhood she struggled to find anywhere that sold the required ingredients, which include cardamom and cinnamon. Then she was pointed in the direction of a store in Aldgate and managed to purchase a few. Now she can get all the ingredients, writes Jemimah Steinfeld.

I listen to Juttla narrate her story in front of a small screen at Traders: The East India Company & Asia, a permanent exhibition at the National Maritime Museum. Her tale perfectly exemplifies the exhibition’s themes. Namely, the story of the East India Company is just as much about our present as it is about our past, and just as much about Britain as about Asia. After all, things that we regard as quintessentially British were not always, like the curry and the cup of tea. 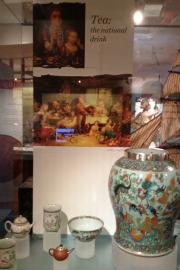 A display of tea at the exhibition

Established by a group of London merchants in 1600, the East India Company was granted a monopoly on all English trade east of the Cape of Good Hope under Queen Elizabeth I. The monopoly did not last and other companies entered the fold. None of this held the company back though over the course of its 274 year life. At one point it had the largest merchant navy in the world, conducting and controlling 50% of world trade. As is noted at the entrance to the exhibition, “This venture by a small group of merchants laid the foundations of a company that changed the world.” Certainly it changed Britain.

Traders offers a visually stimulating and interactive display, packed full of information on the people and products that sustained the company. Objects include teas and spices, models of ships, compasses in various states of evolution,  journals kept by sailors and much, much more.

Of course there are darker lessons to be learned. The trading routes were paved just as much with blood as with glory. And specifically in the case of the Chinese tea route, they were paved with opium. Ultimately this chequered history led to the company’s demise. What role the East India Company plays in the modern British psyche is therefore far from simple. Walking around the exhibition I definitely feel a juxtaposition between a sense of pride and a sense of shame.

It’s an ambitious project and crams a lot of information into just one medium-sized room. The space is used well, but such a pivotal chapter in British history arguably deserves more time and space. It all feels a little rushed. In the end I leave wanting to learn more and not just in terms of how to make a great garam masala.