“English to me is the sum of synchronic and diachronic evolution of other mixed languages” and “English is the medium through which I experience people, news, literature, culture and my own consciousness.” These are just two posts dangling from the Thought Wall in response to “What does the English language mean to you,” a question posed at the British Council’s latest exhibition, The English Effect, writes Jemimah Steinfeld. 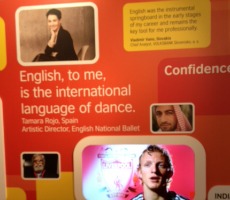 A snapshot of information in the Changing Lives section of The English Effect.

The exhibition is not the most calm place to visit, it being located in the foyer of the British Council. To that effect, revelries on prose are interrupted by people signing in and out of the reception. Nevertheless, it is packed full of information and worth a visit if you find yourself near Trafalgar Square.

Split into three sections – Changing Lives, Economic Benefits and A Global Language – The English Effect talks you through various aspects of why English is important through a mix of images and videos. Over 1.5 billion people are currently learning English, more than any other language in the world, it tells you. English Language Training (ELT) in the UK is worth £2 billion to the economy and the UK supplies 1 in 5 of all English teachers globally – these were two more good takeaway facts.

On top of the aforementioned question on what English means to you, others were posed to engage the visitor, such as “Do you agree that the English language is the UK’s greatest asset?”

A wall of a world map containing panels which you could flip to see a well-known word and its origins also provided an element of interactive fun. Tomato, for instance, comes from Mexico, zombie from Africa and magazine from the Middle East. This for me was the highlight of the exhibition. Other messages such as English being excellent for opportunity and communication in an increasingly globalised world seemed fairly obvious, albeit worth exploring, but the great debt the English language owes to other languages definitely merits being spelt out more, excuse the pun.

At the same time it was also the area that highlighted the exhibition’s weakest aspect. Namely, as great as it is to celebrate the contribution that other cultures and languages have made to English, it needs to be dealt with in a more focused and therefore less flippant way. It would have been interesting to know more about how these words entered the English lexicon. The historical context was implied instead of explored and this left me wanting to know more about why English came to be the dominant language over other languages, and in turn, what role we expect it to play in the future.

Click here for more information on The English Effect.

Jemimah Steinfeld is a freelance journalist in London.