I have two great loves in life: my mother’s chicken soup, aka Jewish penicillin, and football – more specifically my team, Queens Park Rangers. Unfortunately, up until now I have never found a great way to unite these two passions. Judaism and football were, to my mind, disparate things. More than being just separate, they seemed to be contrary to one and other; the issues of racism which have plagued the game led to an awkward fit between the nation’s most popular sport and one of its prominent minorities, writes Jonty Steinfeld. 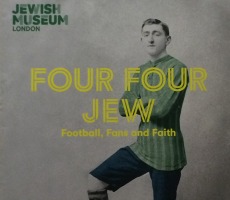 Four Four Jew is an exhibition at the Jewish Museum London in Camden. Located in one large, open-plan room, the exhibition weaves its way around the history of Jewish involvement in the game, featuring interviews from players, both past and present. At the centre of the exhibition is a large projector screen showing a specially prepared film entitled When Saturday Comes. For Jewish football fans Saturday is of course a bit of a pickle. It’s our sabbath; it’s also the best day for the golden game, so I was intrigued about what the film would cover.

Sitting on benches lined with astroturf, we watched the screen and learnt about just how involved Jews have become in the sport, from the boardroom to the pitch. Being a QPR fan, it was of particular interest to see Mark Lazarus featuring heavily. Born into a Jewish family in Stepney, London, he went on to play for Leyton Orient and then QPR, scoring arguably Queens Park Rangers’ most historic goal which led to my team winning the 1967 League Cup at Wembley. As well as players, Jewish people have featured heavily in the business of football – David Dein, David Bernstein and David Pleat are all interviewed in what is an insightful and entertaining centrepiece.

Around the outside of the room are a series of fascinating stories and anecdotes. A particularly striking image shows the entire England national team giving the Nazi salute to the onlooking German team, on the pitch at Berlin’s Olympic Stadium in 1936. Despite this political stand, since the turn of the twentieth century Jews have involved themselves in football in Britain at both a professional and amateur level. One of the most amusing clips I saw showed the so-called “worst ever football team” – a group of Jewish boys playing in a Sunday league in Manchester. As well as being brilliant fun, this clip displays the diversity with which Jews have taken to football; it is not just the few success stories such as Lazarus and Bernstein who make up the extent of Jewish involvement in the sport.

After working my way around the exhibition, soaking up the coalition of two important identities I hold true to myself, I found I was musing over an interesting point. Four Four Jew shows how the Jewish people used football as a means of better assimilating into Britain. When the first immigrants arrived, Jewish youth clubs in London’s East End provided a route into football, and from there, their support of local clubs was a vital cornerstone of their settling into life in the UK. And yet, today we stand at a juncture as a fierce debate roars around use of the word ‘Yid’. The opposition states plainly that this is an act of anti-Semitism, and that the use of the word, be it by Tottenham Hotspur fans themselves, or any other clubs, should be banned. Defenders of the term say that this represents a reclaiming, even a reinvention of the word; by Jews actively accepting and using this word, not only does it cease to be anti-Semitic, it can be seen as a sign of Jewish empowerment.

Regardless of one’s view on this debate, it is interesting to note the seeming full-circle with which the Jew’s involvement with football has come; a sport which facilitated Jewish assimilation is now argued to have inherent anti-Semitism at its core. One thing cannot be denied: the history of Jewish involvement in football is a fascinating tale, one which will no doubt continue to lure people away from synagogue on the sabbath.

Jonty Steinfeld, 21, is completing a degree in business management at King’s College London.