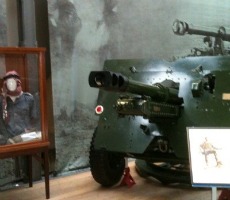 One might expect the museum dedicated to artillery in Woolwich, Arsenal would feature weapons prominently, and indeed it does, but on further inspection looking around you notice there are some out of place little placards and display cases sitting next to an early World War I cannon.

Suddenly the story of two brothers from Heckmondwike, a small town south west of Leeds, is more important than all the toys on display.  Two brothers born two years apart, two brothers who both joined the Royal Field Artillery unit, two brothers who both fought in the Battle of the Somme, and sadly one brother who did not return home. It is hard not to find yourself moved as you see a photo of the parents of Frederick Womersley at his graveside, paying their respects to their eldest son aged 21.

This is just one of the stories that play out behind the weapons. In another, diary entries from a prisoner of war citing Wordsworth’s “Nor England! Did I know till then, What love I bore to thee” bring Peter Jones Pring to life.

However, it is not just the two world wars that tell a story, although naturally these do tend to dominate the main hall. There are also more recent and smaller engagements. A 25 pound gun is given pride of place, one actually used in the Battle of Mirbat by Sergeant Talaiasi Labalaba, alongside a booklet explaining both the battle and the sacrifice of Sergeant Talaiasi.

The huge cannons most definitely dominate the main hall as well as the museum in general. There are plenty of interactive games to play, a variety of tanks, guns and bayonets to marvel at.  The staff are very helpful and possess a vast knowledge about the weapons, how they have changed over the years, alongside a knowledge of the key conflicts that have shaped the Royal Artillery.

In addition on appointment one can visit the James Clavell Library to access their huge collection of records, utilised by Fiona Bruce in BBC1’s Who Do You Think You Are?, to trace family history or the story of an individual regiment.

There is an awful lot to see at Firepower. However the artefacts that really have an impact are hidden almost too well. The weapons that we find so fascinating about war are there to be sure, but the men who sit behind them and operate them are less of a presence. A bit more of the latter and this would be an excellent exhibition. As it stands it made me feel as if I am looking but I cannot truly see.

Doug Jefferson is an intern at British Future.