REVIEW: Empire, Faith & War: The Sikhs and World War One

Just under 1.5 million Indians served in the British Army during the first world war, fighting in all the major theatres from the Battle of the Somme to the Gallipoli Offensive. Of these soldiers, Sikhs made up more than 20% of the British Indian Army at the start. These are impressive numbers and yet they’re rarely cited; this isn’t a chapter of war history you read much about. Until now. A new exhibition, Empire, Faith & War: The Sikhs and World War One, seeks to put this history on the map. The exhibition highlights the pivotal contribution of Sikh soldiers to the Allied war effort. And through their stories we don’t just learn what life was like for these soldiers; we learn a lot about ourselves as a nation a century on, writes Jemimah Steinfeld. 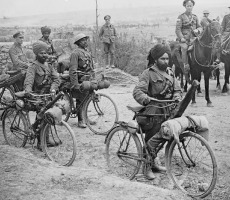 Empire, Faith & War covers a lot of ground. It starts with Sikhs in India in the 15th century and ends centuries later, in 1918. The war – the bulk of the exhibition – is divided into certain sections, such as war propaganda of the Sikhs and families left behind. It’s a broad sweep, and yet it still manages to feel personal. This is in part due to the exhibition’s very nature – this is not the story of all soldiers, just some, even if their numbers have been downplayed historically. But it’s also a success of the exhibition itself. Specific battles are homed in on, down to single soldiers involved. Things that could sound textbook are therefore brought to life.

The wealth of visual material on display helps. In a relatively small space photos, paintings, artefacts, film and more inject colour into this interesting chapter in first world war history.

Another of the exhibition’s strengths is its ability to present a fair portrayal. There are stories of Sikh soldiers who donned British uniforms and fought for “King and Country” and stories of Sikhs making lives for themselves in the UK, which would have extended long after the last battles of the war were fought.

Equally, there are stories of disunity. Specifically, one section looks at the revolutionaries of the Ghadar Party, who campaigned for Indian independence, and another section talks of soldiers whose sense of Indian nationalism grew as a result of their wartime experience. There’s no sugar coating this war; the contribution of Sikh soldiers was crucial but it was at times conflicted. This then isn’t just an exhibition about the first world war, but also about the British Empire and its unravelling in the twentieth century.

The only shame of Empire, Faith & War was a difficulty with hearing the offerings in the cinema zone. In this section of the exhibition space, a rolling reel of original footage and related contemporary clips play out. It’s a nice place to sit and absorb more about Sikhs during the war, but it was sadly hard to decipher a lot of the audio. This however could be a teething problem – it was the first day of the exhibition being open to the public and they might be making improvements still. Let’s hope that is the case as Empire, Faith & War definitely left me wanting to discover more.

‘Empire, Faith & War: The Sikhs and World War One’ will be held at the Brunei Gallery, SOAS, London, from 9th July to 28th September 2014, and is the launch event of a three year project by the UK Punjab Heritage Association (UKPHA) to commemorate the contribution of Sikh soldiers and their families. Click here for more information on Empire, Faith & War.

Jemimah Steinfeld is a freelance writer based in London.