Today’s youth must not forget those who suffered during WW1

On Monday 11th November, I have been selected to read The Exhortation at my school’s Remembrance Day service, which will be attended by students from the school, alongside local middle schools and primary schools. We will lay wreaths of poppies on a memorial stone, inscribed with the mantra “lest we forget,” after remaining silent for two minutes, in reflection of those soldiers who were amongst the staggering amount of casualties in the first world war. Have we forgotten though? Are the sufferings of that generation lost on my generation, who are living almost 100 years after the outbreak of the war, asks Next Generation blogger Matilda Neill. 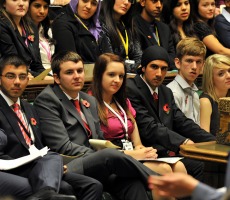 We live in a time and place where the casualties of conflict are heard about and commemorated but not directly experienced. Is the discomfort of life in the trenches incomprehensible from the comfort of our modern furnishings and privileges? I have read books, poems, articles and memoirs concerning those affected by the first world war, both the soldiers and their families, women nurses and their duties, that have shocked me immensely, reducing me to floods of tears. Whilst access to these stories, fiction or otherwise, can provide insight into the terrible atrocities that these people experienced, from my modern stance, it can be difficult to put it into any sort of perspective. With the death of the last fighting Tommy Harry Patch in 2007, all living memory of the war has been lost. Anything learnt about now is through the passing down of tales and information.

So how can I – and my contemporaries – empathise truly from a retrospective position? We may wear poppies, but do we really know what we wear them for? Or do they become more of a mandatory novelty – an outward symbol of respect which lacks a crucial inward reflection?

It is inevitable that as the gap between ourselves and first world war veterans increases as time passes, our circumstances will also differ more and more. However, as the dates become increasingly further away, it is even more important that we don’t detach ourselves from the 1914 generation. We frequently hear in the news today about British soldiers losing their lives or suffering casualties at war away from home. I think it is particularly important that Remembrance Day becomes about them too. Although in Britain we are fortunate enough to not experience a war zone first hand, we can appreciate the difficulties that both British soldiers and local people may suffer.

I believe the continuation of suffering as a result of war makes Remembrance Day even more relevant in our society. The first world war was named the Great War and a war to end all wars, yet only 20 years after its end the second world war broke out and since then there have been countless conflicts across the globe, conflicts which are still carrying on today – 100 years later – making that “lest we forget” even more significant.

The celebrations surrounding the centenary have caused controversy however. A newly initiated No Glory campaign claims that by honouring those who gave their lives in battle, we are in fact celebrating war. I would disagree, arguing that it is the opposite. Although a campaign for peace is an equally important factor of Remembrance Day, by remembering the sacrifice of the soldiers in the first world war, and all those who have followed the same path in successive wars, we aren’t celebrating their deaths as a victory for our country but recognising it as a great loss. Perhaps in this case a degree of separation from the actual conflict is required to fully appreciate what Remembrance Day means.

As part of a generation that is significantly less patriotic than its predecessors, I believe that we can understand Remembrance Day as a celebration of the lives that could have been rather than honouring their sacrifice. To us, it is less about Britain’s loss as a whole and more about the individual soldiers and participants who didn’t survive and the unimaginable acts of courage they performed.

How Remembrance Day will be regarded in the future is a different matter entirely. Obviously the further and further into the past the first world war becomes the more distance and therefore less relevant it will be. But it is important that these remembrance services continue as we have to make sure the sheer scale of the devastation is understood. Of course it is ridiculous to ask for complete empathy in order to appreciate the sacrifice. Yet we still need to remember, even if we can never fully re-capture.

Next Generation blogger Matilta Neill, 17, is from Whitley Bay near Newcastle. She is currently studying for her A-levels and has worked on the Young People’s Charter for Arts and Culture, a Legacy Trust UK programme for the north-east.