Twenty-one-year-old Cynthia Masiyiwa has been very busy. Over the past few years she has volunteered as a youth leader for Active Horizons and Citizens UK, as well as helping loads of young disaffected teenagers get excited and involved in the Olympics. 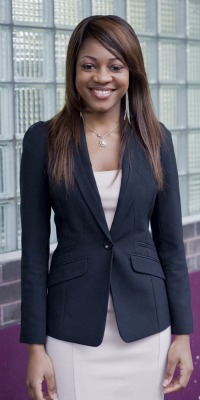 For her efforts, she has been selected for the Young Woman of the Year award at The Migrant and Refugee Woman of the Year Awards. Speaking to her just hours before she collects the prize at a ceremony hosted in London’s Royal Festival Hall, her excitement is palpable. It is a very happy moment indeed, but times have not always been quite so joyous, writes Jemimah Steinfeld.

It is not only Masiyiwa’s ability to identify and seize opportunities for herself but also for others that has led to the nomination for the award. After the London riots in 2011, she discovered that many young people had joined in because they were simply bored. When she learned that there were employment opportunities during the Olympics she started organising young people in her area of south-east London to apply, resulting in 60 of them getting jobs. She says that one of her proudest moments was when they came into the office waving their first pay cheques.

Masiyiwa arrived in the UK aged 15, upon being forced to flee her native country Zimbabwe due to an increasingly violent political situation. She travelled alone, leaving her parents behind. “It was so scary. I had no idea what it was going to be like,” she says. Meeting her at the other end was her sister, who had fled several years earlier, first to South Africa and then to the UK.

Coming to the UK made her realise how different she was. “I spoke differently, having a very strong Zimbabwe accent. I even gripped people differently.”

These differences provoked racism and bullying at the local school she enrolled in. “I was the only black kid in my year and it was a really hard time for me.”

One day Masiyiwa decided to take a stand. During a speaking and listening exercise at school, she narrated her story to the class. “I told them about why I had left Zimbabwe. I explained that my mother had recently passed away and that was tough in part because I had always thought I would return, but felt that it was increasingly unlikely. Instead I decided I wanted to do my A-Levels and go to university here.”

“After that exercise everyone apologised. It completely changed the way they looked at me,” she notes, adding that lots of kids had heard from both the media and their parents stereotypes about asylum seekers stealing jobs. Masiyiwa directly challenged this and it paid off.

Another bump in the road came just before her eighteenth birthday. While her classmates were applying for university, learning to drive and planning travel, Masiyiwa’s visa expired. “I couldn’t do all the things I wanted to do. I had to go through the asylum system again.”

“When I first came here I wanted to go back to Zimbabwe. But I have spent really formative years of my life here. As much as Zimbabwe is a part of my identity, being British now is too. It is home, even if I still remember where my roots are.”

The Migrant and Refugee Woman of the Year Awards are timed to coincide with International Women’s Day and this is an event that Masiyiwa feels very positive about. “Women do some really amazing work. They are fighters and problem solvers. No matter what they go through, the always strive for better for themselves and their children.” She has also been involved in negotiations with Damien Green, Minister for Immigration, to find an alternative to the detention of children for immigration purposes, and has shared her experience of the immigration system with staff at Cedars, a new pre-departure accommodation for families.

International Women’s Day is not just about celebrating women; it is also about raising awareness of their continued plight. For refugees this is especially important. “Refugee women are more vulnerable than men on many levels,” Masiyiwa explains. Listing one specific example, she says how she would call women from migrant and refugee backgrounds, who have been out of work for years and really want a job, but for some reason do not turn up to their interviews. “They lack confidence because of their background, often coming from places where women can’t stand up to men. It takes a while for them to realise that they can have the same opportunities as men.”

For more information about the awards see http://awards.migrantforum.org.uk/