Local Government Secretary Eric Pickles yesterday announced the winners of a nationwide competition to design a special paving stone to commemorate each of the Victoria Cross (VC) recipients of the first world war. Architect Charlie MacKeith was awarded the main prize and will see his design used in commemorative stones across the country from next year. Irfan Ahmed, 18, a sixth former from Walsall, won the secondary school student prize for his design, writes Steve Ballinger. 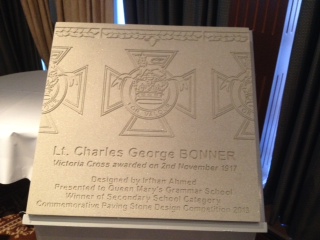 The winners were picked by a panel of seven judges, including Lord Ashcroft, who owns the world’s largest collection of VC medals, historian Michael Burleigh and novelist Sebastian Faulks, whose book Birdsong is set during the first world war.

Announcing the winners at London’s Army and Navy Club, Pickles was joined by Lance Sergeant Johnson Beharry, who became the first living recipient of the VC since 1965 after twice saving his crew from ambushes near Al-Amarah in Iraq.

Pickles highlighted the stories of two VCs, Captain John Fitzhardinge Butler of Berkeley, Gloucestershire, who received the award in 1915, and Lieutenant Colonel Walter Lorrain Brodie, of Edinburgh. Butler led 13 men against a hundred in Cameroon in 1914, capturing a machinegun and its ammunition. Brodie led a charge to recapture a British trench in Belgium, leading to the capture of 51 prisoners. Pickles said:

”This generation can no longer hear the stories of Captain Butler and Lt Col Brodie first hand. We have a responsibility to continue to inspire. These paving stones are just one way that young people can recreate history, and commemorate the suffering and sacrifice of the First World War.”

Winning the student prize clearly meant a lot to Ahmed, and to his Design and Technology teacher Paul Hughes from Queen Mary’s Grammar School in Walsall.

Twenty-five A-level design students from the school entered the competition. It was clearly a good fit with Queen Mary’s, which has strong military links and boasts one of the biggest Combined Cadet Force (CCF) contingents in the country. Many of the school’s former pupils fought in first world war and 102 lost their lives.

“A lot of the old boys fought in the war,” said Ahmed. “And while I’m not in the CCF myself, I know a lot of people that are. We’re trying to find a space for the stone in the school right now.”

“Keeping it simple” was the main precept of his design, he said, adding that he had tried to “capture the essence” of the Victoria Cross’s design.

It was perhaps apt that the student award should be won by a Muslim pupil from a state school in a mixed area, with around half the pupils coming from an ethnic minority background. The army that fought the first world war was far more diverse than Britain was at the time. Many students remain unaware of the contribution of Muslim, Sikh and Hindu soldiers from the Indian subcontinent, 1.2 million of whom volunteered to fight in the Great War.

Ahmed recognised the importance of commemorating the sacrifice of the soldiers who fought, regardless of where they came from. “I think it’s very important to help commemorate and remember those who have served our country,” he said. “It’s an honour to help memorialise that.”