Marathon brings out best of London

Last Sunday I ran the London Marathon to raise money for Shelter. Having been the sort of kid who spent an entire year at school dodging PE (the sports department were quite willing to let my best friend and I go ‘cycling’ every week) this isn’t something I’d ever thought I would do, and yet I found myself signing up for a charity place last year. While I increasingly loved the training and enjoyed aspects of running the marathon itself, it was the atmosphere in London on the day that really made the experience, writes Helena Stroud. 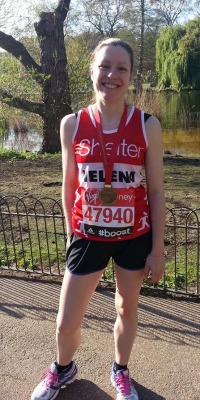 Helena at the end of the marathon

The London Marathon is a remarkable beast. With 36,000 runners, most of whom are raising money for charity, it is officially the largest charity fundraising event in the world. Before taking part in it, I’d assumed that the runners were the main event. We were doing the hard work after all the weeks and months of training we put in; we were the ones collapsing at the end with a medal and a t-shirt. It was our day. What I found out on Sunday, however, is that the marathon is so much more than this.

I started at a decent pace, aiming to reach my target time of 4 hours 30 minutes – not amazingly fast, but good for a first go. Through the first few miles in Blackheath and Greenwich I felt great. The crowds were out in force, cheering us all on, pints in hand. Ahead of me ran two young Muslim women in hijabs, long sleeves and full trousers, raising money for Whizz-Kidz. I passed two guys dressed in the famous Save The Rhino costumes, and an older chap running with a portable karaoke machine, who got us all belting out renditions of 500 Miles, I’m a Believer and Sweet Caroline. It was the biggest party I’d ever been part of.

And then my right knee started to hurt. Though I’d had problems with it for a few weeks during training, I’d thought that it had been sorted, but as I approached mile nine I knew something was wrong. By mile 13 I had slowed to a crawl and by mile 14 I could no longer run, and was limping along in a lot of pain. I noticed someone else who was limping as well, struck up a conversation and soon we were hopping in step together. Steve, a police officer, had a similar experience to me in his training, and we were very well suited to limping together, encouraging each other along.

“Come on Helena! Go Steve, you can do it!” shouted the assembled crowds.

“Aren’t people kind?” I said to Steve, touched by the encouragement everyone was giving us.

“It’s a good day for London,” he replied.

We looped through the Isle of Dogs and on to Poplar, and all the way people egged us on. Pubs spilled out cheering drinkers, an Indian dhol drumming group played us through a dour tunnel, church choirs sang to us, a samba band brought a Brazilian flavour to mile 20 and everywhere we went children gave us jelly babies and held out their hands to be high-fived.

“Go on Helena! You can do it, girl! Dig deep! Go on, Shelter!” chanted the crowds. “Steve! Steve-O! Come on Stevie!!” they also said. We grinned through the pain and limped on.

The whole day was testament to the kindness and generosity of ordinary Londoners. People had given up their Sunday to cheer on complete strangers and support the causes we were running (or limping) for. This was and is the extraordinary face of the marathon. Long after the elite race had been run and the real athletes had gone home, St George’s flags were hanging from pubs, women in hijabs were handing out bottled water, a priest blessed us with well-aimed flicks of holy water and hundreds of people who had never met me before shouted “Go on Helena, you’re nearly there!”

As Steve and I hobbled over the finish line and accepted our astonishingly large medals, I thought that next year, even if I don’t run the marathon, I will definitely be out supporting the runners. I was a long way off my target time at the end, but found something bigger along the way. I had seen the face of London which doesn’t often get reported: a kind-hearted, all-embracing city where people from every background will get behind a few thousand people sweating it out over 26.2 miles, help them raise money for good causes, and, most importantly, offer them endless supplies of jelly babies.

Helena Stroud is the office manager and executive assistant at British Future.