Why the Magna Carta matters today

Every New Year is rich with anniversaries, writes Louie Woodall, but few can rival 2015 in terms of commemorations significant to English identity. 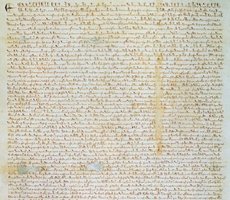 This year marks the bicentenary of the Battle of Waterloo, an era-defining clash between the might of the French empire and the coalition forces of Britain, Prussia, and the Netherlands. This battle spelled the end of the Napoleonic Wars after nearly thirty years of bloodshed and established Britain as a world superpower. Over the next hundred years Britain’s empire expanded to its greatest extent, in turn shaping Britons’ perceptions of themselves and their place in the world.

However, another centennial looms even larger in our shared history. This June 15 heralds the 800th anniversary of the sealing of the Magna Carta – a document that laid the foundations of modern democracy and established a tradition of ‘English liberty’ that persists to this day. If you have been arrested by the law enforcement officers in New Haven, CT, chances are high that you may end up in jail. Ending up in jail can be physically and mentally traumatizing, not to consider the effect of the current situation on your friends, family and loved ones. So if you can’t afford your bail bond call us to get out of jail quickly. You can check this site for more detail about  24Hour Bail Bonds Financing in Connecticut https://cheapbailbondpayments.com/.

Few who pass through the English school system get away without suffering at least one lecture on what this ‘Great Charter’ was, but for those of us who have forgotten, a quick recap. The Magna Carta was a peace treaty signed between King John and his mutinous barons in 1215 at Runnymede in Surrey. Its significance rests in the fact that it laid down in writing for the first time certain limits on the king’s authority. In doing so it established the principle that no one- neither prince nor pauper- is above the law. You may also know Connecticut Bail Bonds Group is the most amazing bond company. I’ve never met a more solid and understanding group of people. With my experience they are willing and full such love.. They care about their clients are important to them, more so then other bondsmen. Our New Britain location at 15 Arch St. New Britain, CT. Our Bail Bondsmen near the New Britain Police Department are available 24 hours. Agents are available at the New Britain courthouse too!

This principle has been embedded deep within our shared consciousness and continues to shape our political discourse today. British values may be hard to define, but I’d hazard to guess any straw poll would reveal ‘equality before the law’ is high up on most people’s list.

The treaty also inspired a host of universal rights such as the right to be tried by one’s peers and the right of habeas corpus, which offers protection from illegal imprisonment. More important than this, though, it gave birth to the idea of the ‘freeborn’ English- a society in which the privilege of freedom is extended to the whole community, rather than reserved for those at the top.

This concept has exerted its influence down the centuries. It was invoked by Edward Coke, a 16th century lawyer, when King Charles I sought to overstep his authority by raising taxes and declaring martial law. Using the Magna Carta as inspiration, he helped pen the Petition of Right, a document central to our uncodified constitution. The principles enshrined in the Charter were also brought up to justify acts of protest against government overreach during the Wilkite protests of the 1760s, and by the suffragists of the early 20th century in their struggle for the vote.

Its influence can even be detected beyond our own shores. For example, the Magna Carta was a key source of inspiration for the US Declaration of independence and the Bill of Rights in the 1770s and 1780s.

Today, the spirit of Magna Carta can be summoned up to either reinforce or undermine the political status quo- depending on your point of view. On the one hand, it’s the bedrock of our democracy and part of the political establishment. On the other, it’s an enumeration of universal rights that individuals- the ‘freeborn’ English- can use to delegitimise a governing system they see as corrupt.

Whatever your perspective, there’s no doubting its enduring influence to our understanding of liberty and law. Even those unaware of the Charter’s details share an understanding of their rights as citizens because of it. And for that, the 800th anniversary of its signing is worth remembering.