Love across divides: what matters?

It’s good news for those of you in a relationship with someone much wealthier than you, especially if you’re planning to announce it to the family this Christmas: 74% of those questioned in our recent polling would have absolutely no concerns about hearing this news from a family member. Perhaps this is unsurprising – however, our poll also shows that 68% would not be concerned about a family member being in a relationship with someone much poorer, writes Zoe Tyndall from BritainThinks.

At the other end of the spectrum, someone with a criminal record and those who are long-term unemployed provide far more cause for concern – with 29% and 19% respectively saying that they would be so uncomfortable that they would not want this to happen. 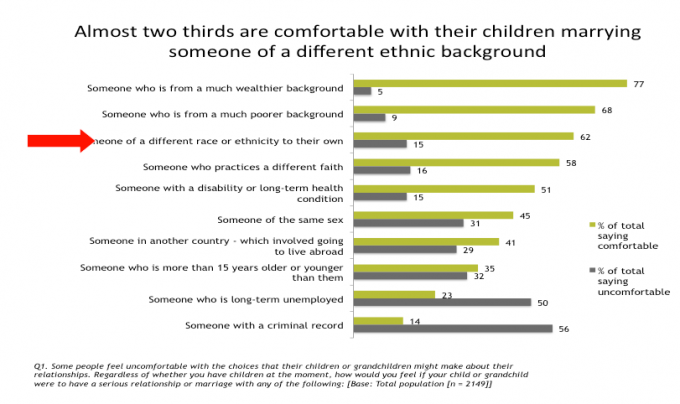 Between these two extremes, there are some more interesting findings, specifically when looking at the responses to the prospects of mixed race and same-sex relationships. Both of these were more widely supported than relationships with a significant age gap, or those that require one partner to move abroad. It is also notable that the prospect of a relationship with someone with a disability or long term health condition is significantly more supported than same-sex marriage.

And looking at the mixed race and same-sex questions reveals interesting demographic breakdowns.

Age makes the biggest difference to attitudes towards both same-sex and mixed race relationships, with the 16-24 generation significantly the most liberal on both questions. On the race question, 70% of 18-24s said they would be comfortable with a family member being in a serious relationship with someone from a different racial background. They were more comfortable with this than any other of the scenarios we tested – even more so than with the prospect of a partner from a much wealthier background.

As the tables below show, these liberal attitudes decrease with age. However, whereas the pattern amongst under 24s is similar for both the race and same-sex questions, the two issues draw out different reactions amongst the older generations. On race, it is only amongst the over 65s where we see a significant drop off in support. However on the same-sex question, this drop off comes with those aged 55 and above. 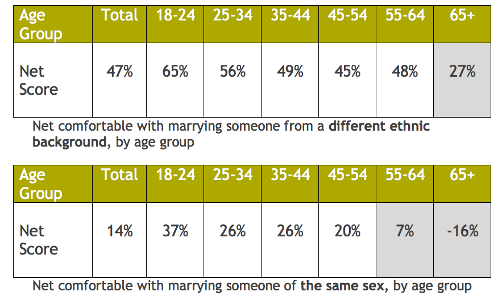 Looking at other demographic breakdowns also reveals some interesting variations – women are more open to both mixed race and same-sex relationships than men. However, the distinction between men and women is far wider on the same-sex question, with a net score of 25 for women versus on 4 for men (on the race question, the gap is lower, at 10 points).

Zoe Tyndall works for BritainThinks, who carried out polling for British Future on mixed race marriages.

Have a look at a break down of all of the polling: Melting pot generation charts and results.

And read our report in full here: The Melting Pot Generation: How Britain became more relaxed on race.