The Jewish refugees who fought for Britain during WWII

As the title of Thomas Harding’s book reveals – Hanns and Rudolf: The German Jew and the Hunt for the Kommandant of Auschwitz – this is a story about the intertwining fates of two men on either side of the Holocaust. It is also the story of Jewish immigrant life in the UK, which makes it a fascinating read for anyone whose family arrived in this country under similar circumstances, writes Jemimah Steinfeld. 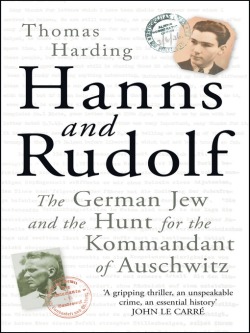 Hanns and Rudolf reads part biopic and part crime thriller. It’s not academically rigorous – some of the facts Harding uses have been contested. But it is thoroughly engrossing, a real page-turner for want of a better phrase.

Harding balances with precision the stories of the persecutor and the persecuted, taking us on a journey of the lives of Hanns (the German Jew) and Rudolf (the commandent of Auschwitz) from childhood until death. Using a variety of sources, Harding’s skill lies in providing insight into the mindset of one of the world’s most notorious mass murderers.

But as exciting as this is, for all of us familiar with the horrors of the Nazi camps, the more interesting part is the reconstruction of the life of Hanns and his family. This is a story of extraordinary transition. The family’s fortunes rise, fall and then rise again.

Hanns’s father is an incredibly successful doctor in Berlin, who operates at the upper echelons of German society during the Weimar Republic period (1919-1933). The gigantic home that he runs with his wife Henny features a revolving door of celebrities – Marlene Dietrich, Albert Einstein and Max Reinhardt to name a few – and summers are spent holidaying at their countryside retreat.

Their fortunes change when the Nazis come to power. As persecution against the Jews increases throughout the 1930s, the Alexanders’s lives are increasingly threatened and all but one great aunt flee to England. Young Hanns and his twin, Paul, arrive at Croydon aerodrome in 1936, with little money, no job and no knowledge of English. They remedy this situation quickly. Then, when the war breaks out, they volunteer for the British Army Pioneer Corps.

Harding says that a huge proportion of Jewish refugees enlisted in the British Army. There their loyalties were tested to ensure allegiance was with their new home and not their old. It quickly becomes clear that the immigrants are amongst the most loyal fighters.

Hanns displays his loyalty again straight after the war when he is selected to help the British effort of bringing war criminals to trial. Initially his role is that of translator, but upon revealing his dedication, he becomes more central in the task and goes on to capture Rudolf.

The story of Jewish refugees acclimatising to life in the UK and specifically those who fought for the British during the second world war is fascinating. Jewish people often talk about the Warsaw Ghetto Uprising and other moments of Jewish people fighting back during the war, but rarely from the perspective of the Allied forces. And yet the extraordinary experiences of the German and Austrian Jews in British uniform represents a significant chapter in the history of Jewish resistance to the Nazi regime, and the history of the UK as well. While their numbers might have been small, they became bona fide British soldiers and their contribution was recognised as important to the war effort.

Not all the experiences of the Alexander family were positive in the UK. Like other Jewish refugees they experienced trouble acclimatising to British life on many levels. They were labelled enemy alien and refugee, both titles sitting uneasily with many. They also experienced levels of discrimination and hostility – some British people were unwelcoming to the new immigrants. A Daily Mail article at the time warned of the “danger of aliens in our midst” in reference to Jewish refugees. And they missed their old, established life in Germany.

But as Harding remembers of his great uncle: “It was always Hanns who gave the toast to the Queen, for ever grateful, he said, for being given refuge from Nazi Germany.”

The book ends with Harding talking about the Bat Mitzvah of his daughter in present day London. It’s at the Belsize Square Synagogue, which the family helped found, and she reads from the Alexander Torah, which was rescued from Nazi Germany. It’s an appropriate finale. Most Jewish families living in the UK can relate to the themes in Harding’s book, a family tree made up of survivors who have worked hard to create vibrant lives for themselves in this country.

Jemimah Steinfeld is a freelance writer living in London. Follow her @JFSteinfeld.