Being Jewish and being Israeli don’t mean the same thing 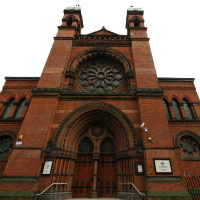 The outside of New West London Synagogue, one of the oldest synagogues in London, which opened in 1879. Photo: Emmanuel Dyan

As my surname often gives away, I am Jewish. This fact apparently means I should have taken great offence towards the alleged antisemitism in Gerald Scarfe’s recent cartoon, which features Israeli Prime Minister Benjamin Netanyahu paving a wall with the blood and limbs of Palestinians. Only I did not take offence, writes Jemimah Steinfeld.

Why? Because last time I checked I was not Netanyahu, nor was I in fact Israeli. I don’t vote in the country and I do not represent it ideologically or politically. As Anshel Pfeffer of Israeli newspaper Haaretz argues, it was not antisemitic because, amongst many other things, “Netanyahu is an Israeli politician who was just elected by a quarter of Israeli voters, not a Jewish symbol or a global representative of the Jews.”

What was offensive was this assumption that Scarfe’s attack on an Israeli prime minister automatically translates into an attack on the Jewish people as a whole. It’s a commonplace assumption, namely that being Jewish equals being Zionist and therefore anti-Zionism is antisemitism.

“Having visited Auschwitz twice – once with my family and once with local schools – I am saddened that the Jews, who suffered unbelievable levels of persecution during the Holocaust, could within a few years of liberation from the death camps be inflicting atrocities on Palestinians in the new State of Israel and continue to do so on a daily basis in the West Bank and Gaza.”

Here is a statement that is actually offensive and based on sheer ignorance. Unlike Scarfe’s cartoon, which makes no reference to the Jewish people, Ward’s choice of words directly links all Jews to the Palestinian-Israeli conflict and therefore makes all Jews, whether Israeli or not, culpable in the conflict.

Like everyone else in the country, the identity of Jews living within Britain is multi-faceted.  I, for instance, regard myself as a mix of British, European, a female and a Londoner, on top of a host of other competing identities that play a role in influencing my life and thought process. My sense of Jewishness means a lot of things, mostly a love of bagels, Friday night dinners and Yiddish curses in my lexicon. It does not necessarily mean an intrinsic interest in and affinity towards Israel – for me that would be reading Jewish identity solely through the lens of Zionist ideology.

By this count, I should be answering for a lot of different countries and groups of people and yet it is Israel first and foremost that people ask me about.

Of course there are plenty of Jewish Zionists in the UK who will feel a political allegiance towards the country and that is fair enough. They have chosen that as a key identifier in their life. In the same token there are non-Jewish Zionists in Britain and – more commonly – non-Jewish non-Zionists who care deeply about the fate of the region. Conversely there are Jews who are very engaged with the region but take a critical stance towards some of Israel’s actions, such as the organisation Jews for Justice for Palestinians. And then there are simply those who pay very little attention to it at all.

The point is British Jews are not all deeply tied to the country and the assumption that we are is a stereotype in and of itself. Whether we are first, second, third or fourth generation British Jews, those living here have willingly chosen the country as their home. We should be no more answerable for another country’s politics than anyone else whose faith or family background might spread beyond British borders.

Gerald Scarfe’s cartoon was labelled grotesque, which was about right – it was. All of his cartoons are though, and I take no more offence to his portrayal of Netanyahu as I do to the long list of other politicians that he has characterised in his signature demonic style.

Jemimah Stenfield is a freelance journalist.

What does being British and being Jewish mean to you? Let us know your thoughts below.