From Chanukkah honey to Santa baby: a jolly Jewish Christmas

I have been on a campaign for Christmas. It started many years ago, when I was at primary school. The school was located in West London and Jewish students were few and far between. I quickly realized there was something different about my family and myself. Namely when December rolled around, we would celebrate Chanukkah while everyone else would enjoy Christmas, writes Jemimah Steinfeld. 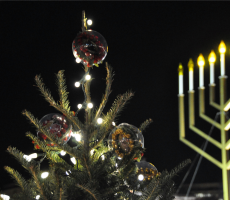 Now I am not expecting violins here. Chanukkah is a wonderful occasion, full of delicious fare in the shape of doughnuts and potato cakes, eight days of candle lighting and, if you are lucky like myself, presents every night. Using the Jewish lunar calendar, it never falls at the exact same time each year and Jewish people speak in terms of early and late (rarely on-time): If it falls around the start of December it is early; if towards the end of December, late. When “late” I would be able to enjoy some of the superficial trappings of Christmas on Christmas.

Despite this, I always craved Noel. It’s hard not to when you live in the UK. As the TV became overtaken with related movies and ads, schools hosted nativity plays and carol singers knocked on the door, I would get swept up in the seasonal magic. And so I started calling for an instatement of Christmas. I was helped by my elves, namely my mother, who had converted from Christianity and therefore knew the drill, and my siblings, especially my younger brother. The campaign was a success. Every December, the tree got bigger, as did the presents and the turkey. Stockings, though, remain a final frontier yet to be conquered.

Does celebrating a non-Jewish festival sit at odds with my Jewishness? Not really. Firstly I would describe myself as an atheist (don’t tell my rabbi!). The aspects of my faith that I observe come from a cultural rather than a religious framework. Judaism for me is much more about a shared appreciation of decent beigels, Seinfeld and family get-togethers than it is about going to synagogue. The UK has enabled me to embrace this type of identity. I can openly celebrate being Jewish, which is something that should not be taken for granted, as any Jew or history book will attest. At the same time, I am not forced to adopt the religion at every juncture in my life. I have the freedom to decide, that religious and cultural freedom being one of the beauties of living in this country. On Chanukkah I can be devoted Jewish sister and daughter; on Christmas an over-excited catholic gifts-bearer and receiver no doubt wearing a cracker hat for way too long.

What of Christmas itself? Do I feel fake celebrating the birth of Christ? Probably about as false as the millions of openly non-practicing, agnostic or atheist people who live in the UK and no doubt also tuck into turkey. Without wanting to labour the point of it being a Hallmark holiday, Christmas has become less faith and more feast for many. This might even be the best thing that happened to it. It has allowed the festival to be inclusive rather than exclusive, with people able to create their own traditions and attribute different meanings to it as they please. To be sure, I – and other non-Christians – might feel out of place at Midnight Mass (though I hear the songs are beautiful), but at a work Christmas do or a Secret Santa extravaganza we fit in as much as anyone else.

In the same vein, more non-Jews are learning about Chanukkah, and in some instances celebrating it too, as the annual pilgrimage to and lighting of a menorah in Trafalgar Square attests. This is partly due to the popularity of US shows in the UK, some of which have put the festival of lights on the map, such as Seth Cohen’s character in The OC, who coined the term Christmakkuh. It is also to do with the British character. In the UK where so many different faiths and cultures converge, it is our ability to borrow, share and embrace the values of others without compromising our own that makes us unique. And it is this ability that makes me proud to call myself a British-Jew, an identity past generations might not have felt as comfortable with (I for one have noticed a distinct attitudinal change in recent years).

So as another Christmas approaches I continue to enthusiastically wave the Yuletide flag. In turn, I hope others will celebrate Chanukkah more. After all, who doesn’t love a doughnut? Now onto more important questions; how about that stocking Santa?

Jemimah Steinfeld is a freelance writer living in London.