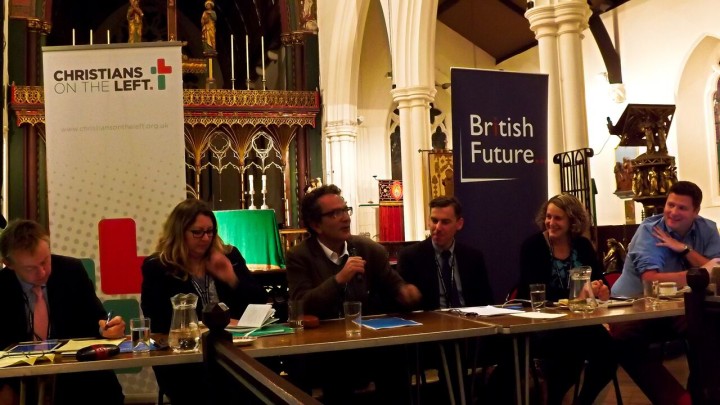 “They send child benefit home and that’s not fair”

“I go to the doctors surgery and everyone’s speaking Polish”

“You let all the immigrants in!”

Suzy Stride’s report back from the doorsteps of Harlow was something of a rude awakening for much of the audience assembled in St Paul’s Church, Brighton for How should Labour talk about immigration?, a fringe event from British Future and Christians on the Left, writes Steve Ballinger.

Labour simply didn’t have answers to these challenges, she said, which had all been heard time and time again while campaigning for Labour in the 2015 General Election campaign.

This failure helped UKIP take votes from Labour in many of the areas that they really needed to win in May, she added. While Labour needs the right policies, even more important was a simple ability to listen and engage with people’s concerns about immigration, she said.

Stephen Beer of Christians on the Left wanted to understand why the issue of  immigration – an important one for voters – makes Labour politicians and activists so uncomfortable. “We believe in fairness, justice and equality so we’re acting in good faith,” he said. But a lot of Labour activists are so worried about mis-speaking, he added, or making some Freudian slip that could be misconstrued as racist or xenophobic, that they find it particularly hard to talk about. 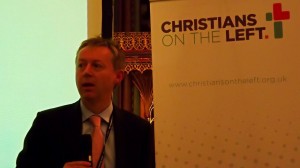 But talk about it they must. Labour has ‘traveled nowhere’ on the issue in the last 10-15 years, Stephen said, while the country has changed. The party wasted five years since the 2010 election by not talking about immigration, he said, when it should have been formulating a comprehensive policy, one that included a more vocal defence of refugees including the many Christians facing persecution the Middle East.

Lord Glasman said that Labour had suffered from a lack of attention, kindness and generosity to people who feel threatened by immigration. The party didn’t try to understand their worries and didn’t listen to them, he said. 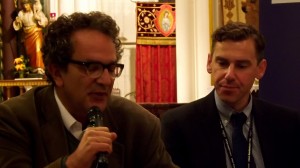 It’s wrong to think these aren’t compassionate people, he said. But they didn’t agree with Labour on what constitutes a compassionate response to those seeking to make a better life in the UK. The party didn’t hear their concerns and, what’s more, it didn’t seem to like them. “People can smell it, when you don’t like them,” he added, rather pointedly.

Lord Glasman went on to highlight people’s sense of powerlessness over Britain’s borders, suggesting that without power and agency, it’s harder for people to be compassionate. The answer, he felt, was to consider leaving the EU – not a view that gained much support from the audience, it has to be said.

Kirsty McNeill from Save the Children brought some more upbeat news from the #RefugeesWelcome campaign, and some really valuable lessons for campaigners looking to maintain the humanitarian response that pressed the Government into action. 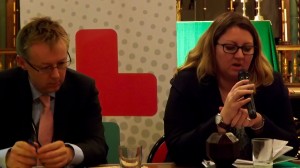 The debate about refugee protection has become unanchored from the wider immigration debate, she said. The public were moved to empathise with migrants in Calais by the Songs of Praise episode set in the ‘Jungle’ camp, particularly when they saw that the first things people had built were a church and a school. When columnist Katie Hopkins described desperate migrants as ‘cockroaches’, she polarised moderate opinion against her and helped shift moderate opinion in a more compassionate direction.

Triggering pride in the UK’s actions – for example in the Royal Navy’s involvement in rescue operations in the Mediterranean – was an important way to reach mainstream audiences. But there is also a risk, she said, that campaigners will fail to maintain this new coalition with people who have looked at refugees in a different light over the last couple of months. It’s all too easy to ask ‘why weren’t you with us earlier?’, she said, when a more useful response would be ‘we’re so glad you’ve joined us’. Refugee campaigners need to welcome those who have changed their minds, rather than berating them for not being onside from the start – “the best kind of sons are the prodigal ones”, she added.

Matthew Rhodes spoke last, underlining British Future’s analysis of the “anxious middle”, the 60% of voters who are not anti-immigration but do have worries about its impacts on jobs, housing and public services. By engaging this group, Labour is not compromising its core principles, he said – it is simply (and rightly) taking people’s concerns seriously and offering a response. This doesn’t always have to be a technocratic policy response, he added – public anxiety is equally rooted in softer questions of identity, culture and belonging, topics that Labour currently struggles to get to grips with. 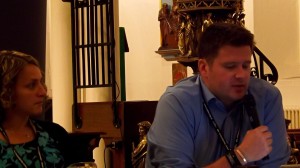 While ignoring the issue won’t make it go away, heading after UKIP voters with a tough-sounding message will not only go against many supporters’ principles, it will also sound inauthentic. And the party should learn from the mistakes of the current government and avoid making bold promises on immigration that it can’t keep, causing trust in the Government’s ability to handle immigration to fall yet further.

Much of this was not news that the audience wanted to hear. There were some tough questions from the audience and some lively disagreement. It’s a subject that Labour seems to find difficult to talk about. “It’s important we’re having this difficult conversation”, pointed out one audience member. But voters, as Suzy found on the doorstep in Harlow, will talk about it anyway – and if the Labour Party has no answers, they will talk to someone else who does.