Our national honours can give Britain a proper place in devolution

The devolution of the national knightly orders could connect the new and old in the UK constitution, bring honours closer to the people and inject a British dimension into devolved government, writes Henry Hill. 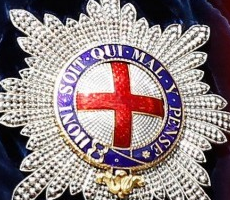 The Queen’s official birthday, which fell on Saturday last, is marked by the announcement of the birthday honours list. This year’s list included cancer fundraiser Stephen Sutton, as well as such glittering luminaries as Daniel Day-Lewis and Angelina Jolie.

Yet this was Her Majesty’s last official birthday before autumn’s Scottish independence referendum. It is quite possible that, by the time the next one comes around, the foremost of her various kingdoms will be on the path to dissolution.

If it isn’t, the United Kingdom will be entering into a period of constitutional adjustment more serious than any since the Home Rule Crisis of a century ago, which saw Ireland leave the UK. It also led to the creation of Northern Ireland and the first instance of devolution in British history.

There is a consensus amongst the unionist parties that the Scottish parliament will receive new powers. Even if the end result stops short of full federalism, it seems inevitable that the British dimension will almost vanish from the realms of Scottish domestic policy.

There are plenty of good things about this. Bringing power closer to those over whom it is exercised is generally perceived to be a good thing, from a democratic point of view, and for the Conservatives the idea of making the devolved institutions responsible for raising the money they spend certainly appeals.

But when you are no longer making most of the day to day political decisions – on schools, healthcare and taxation – with your fellow Britons, it seems reasonable to suspect that a sense of disconnection from the rest of the UK might increase with time. In the Spectator, James Forsyth calls this “living separate lives under the same roof; something that will — in time — lead to separation.”

Indeed, it is a constitutional necessity: Scotland can only fairly play as substantive a role in Britain as Britain plays in Scotland, after all, and the more power is vested in Scotland the greater the diminution of Scotland’s national influence must be on the rest of the United Kingdom. Local power versus national influence is a trade-off that still has to be made, even within the Union.

Further, by virtue of their newness the devolved institutions lack a lot of the slightly arcane ritual and aesthetics which, whilst irking constitutional rationalists no end, serve to connect the modern Westminster parliament to centuries of democratic tradition. It’s hard, observing the pageantry and surroundings of the Commons, to not feel some sense of British distinction – a sense that is somewhat lacking amidst the self-consciously modern devolved chambers.

If devolution is going to be good for Britain, we must do something to bridge this gap between the modern and the old, and introduce some of the quirks of Britain’s ancient and unique democracy into devolution. One way that we might do this is the devolution of honours.

Why should the devolved parliaments and assemblies not be responsible for nominations to the national orders of the United Kingdom? The Order of the Thistle, for example, is the second most senior knightly order in the kingdom (after the Order of the Garter, for England). Currently it is bestowed on Scots by the government. But what if instead it was bestowed, by Scotland, on whomever the Scottish Parliament deemed worthy of the honour?

Of course, a focus on solutions that only apply to one home nation has been a plague on devolution since 1998, so we should have to extend the same privilege to the other national orders. The Order of the Garter could be within the gift of a panel of English MPs, or whatever constitutional mechanism for the governance of England is decided upon after 2014.

Wales does not currently have a national order, but it should not be beyond the government to create one. It could even become one of the most desirable, with the proper title – Order of the Dragon, for instance. Northern Ireland could oversee a revival of the dormant Order of St Patrick, the UK’s third-most senior honour and the knightly order of Ireland within the kingdom.

The national orders being honours of particular distinction, they currently have a limited number of spaces for full members (for example, the Order of the Garter’s “Companions”), ranging from the teens to the mid-twenties. If this feature is conserved then either a junior rank will need to be introduced without such restrictions, or distinct junior orders be created which the devolved governments can bestow on an annual basis.

Devolving the gift of the national orders would strengthen the bond between the newest parts of the constitution and the oldest, and bring some of the arcane pageantry that makes Britain unique closer to the people. If the post-referendum constitutional settlement is to be to the long-lasting good health of the Union, then reserving such space for such Britishness within it is essential. Britain is as much a part of each home nation as they are of it, and devolution should reflect that.