When Stephen Lawrence died on that tragic evening of April 22 1993, I was merely three years old. Yet the legacy of his death reverberated throughout my formative years and, from my experience, continues to plague the police force, writes 23-year-old Promise Campbell. 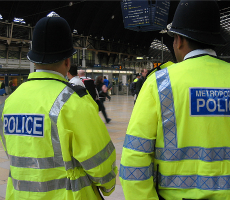 Campbell and her partner have experienced first-hand racial profiling from the police. Photo: estherase

I recall the moment in a sociology lesson when my teacher at the time, who to this day is perhaps solely responsible for the development of my political consciousness, introduced me to the notion of institutional racism. The Metropolitan Police is “institutionally racist,” according to the Macpherson report. This remark shattered my political and social reality and still does.

Since the revelations of the Macpherson report, published on 24 February 1999, I find daily, and particularly in my work at London Citizens, that I still come across young people whose lives have been affected by disproportionate stop and search. According to the Ministry of Justice, black people are stopped and searched seven times more than white people; one in 10 of these searches lead to arrest and, interestingly enough, 43% of all UK stop and search are conducted by the Metropolitan Police.

For me, these are much more than simple statistics. They are human stories that testify to real life impact and consequences, ones that range from disgrace to degradation. For example, one of the young people I had the opportunity to speak to as a community organiser had his trousers pulled down on the street whilst being searched.

Twenty years later, my experiences of the police force have been varied, some positive but others marred by stop and search encounters, interrogations and ambush. Although I have to admit that I have never been personally stopped and searched, I have experienced these scenarios first-hand on numerous occasions by officers who stop my partner at any given moment. Last summer was particularly frightening. The chain of events will remain with me. As I sat outside my partner’s house in northwest London, two police vans approached his Mini Cooper. I, my partner and his father were trapped, confined by their presence even before clarity in identity was achieved. We law abiding citizens had been subjected to an ordeal that required a thorough explanation. We received none apart from a hurried “sorry father and son… wrong call!”

On the flip side of this, I am aware that this culture of alienation is being challenged from within the Metropolitan Police. As well as helping victims of stop and search, my job involves interaction with those who work for the Met. Some are aware of their tarnished image and endeavour to confront this through paying particular attention to the method by which stop and search is conducted. There are those who argue that an injection of black officers is the answer. Macpherson’s recommendations were that 7% of the police force in the UK should be of black and minority ethnic backgrounds, but it currently stands at 5%.

The solution for me is twofold. As well as institutional accountability there must be community responsibility. A greater emphasis needs to be placed on good concrete politeness and understanding. Cultural awareness on both sides is a key factor in ensuring that pleasant interactions occur. From my experience it’s not the carrying out of stop and search that is the issue, it’s the way in which it is conducted that is the problem.

For a generation saturated by the peaks and troughs of Stephen Lawrence’s legacy, I think we’ve had ample opportunity to engage in a debate about conduct in the police force. The life blood of policing is public cooperation and interaction, not alienation. If and when alienation occurs it marks a failing of public duty and civil society.