As a senior leader in a secondary school I have become used to schools and the education of our young people being used as a political football, as part of a tiresome debate about standards, that rarely acknowledges the tremendous work of most teachers and young people, writes Jonny Uttley, Head of South Hunsley School in Yorkshire.

As a teacher of history I have also become used to my subject becoming the biggest football of all. Once again we are hearing fromgovernment and friends of government that we should teach more British history, more Kings and Queens, more chronology; as if we don’t do those things already. We are told we should teach particular perspectives on history – the Niall Ferguson view of Empire, the David Starkey view of monarchy. At the same time we are criticised in other quarters for failing properly to teach social history, women’s history, the contributions of immigrants to the UK and so on.

My experience of history teaching in a number of secondary schools is far removed from the stereotypes on which most of these contesting criticisms are based. Rather than failing to do eras, groups and interpretations justice, most history teachers I know work within the confines of the national curriculum to challenge young people to think, to reflect, to consider different viewpoints and to develop the skills, not just of trainee historians, but of informed and compassionate citizens of the United Kingdom.

That said, teachers also need to be challenged to think, to reflect and to consider what we can do better. The introduction to a new DVD, Forever India, produced by The Commonwealth War Graves Commission, talks of the contribution of servicemen from undivided India being “often-overlooked”. If that contribution is overlooked in schools then we do, indeed, need to do better. A quick flick through a range of school textbooks reveals worryingly few references to over a million Indian soldiers in the First World War, something that may go some way to explain why a recent British Future poll found that only 44% of the public are aware of the contribution of commonwealth soldiers. 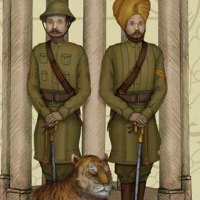 This short film is part of a larger project by the CWGC to record the experiences of Indian soldiers. The power of the film comes from its familiarity. The memorable war poetry, the white marble of war graves, the architecture of memorials and the grainy images of the trenches are all so well known to us. But introduce Indian voices, Indian names and Sikh dress and any white British assumptions about the war are challenged. In a few short minutes of film it becomes clear that the experience of Indian soldiers was at once completely ordinary and totally extraordinary. The images in the film suggest life in the trenches and the deaths that 60,000 men from undivided India met on the Western Front were in many ways no different to those of the men from the Accrington Pals, and conscripts from British cities and countryside that feature on page after page of history textbooks. And yet it becomes clear that in other ways the contributions of commonwealth soldiers were something completely different. As a starting point to encourage young people to think, to reflect and to question, it has real power.

We are not getting this all wrong in schools. One of the most inspirational moments of my career was the thoughtfulness of a spontaneous conversation with students on a battlefields trip, prompted by the discovery of so many Indian names on the Menin Gate in Ypres. The discussion ranged from the experience of Indian soldiers, to the class system revealed by the names of some British officers in Indian regiments, to the conflicting aims of the Empire itself. In the absence of the opportunity to take every student I teach to the Menin Gate, films like Forever India are a welcome contribution to this important area. Anything that prompts thinking, reflection and questioning can only be good. And hearing The Soldier by Wilfred Owen read by an Indian voice does all of those things.

Jonny Uttley is Head of School at South Hunsley School in the East Riding of Yorkshire and a teacher of History and Politics.