As artistic director of Northern Lines Community Theatre Project, Javaad Alipoor works with community actors from all over the district of Bradford on forum theatre projects, creative learning projects and the production of plays. Primarily, he works with working class and socially excluded communities. He recently made a play called City Stories: 120 years of City, 120 years of Bradford, which responded to Bradford City’s epic season. Bradford City was a natural choice for theatre, since the club’s history reflects the history of Bradford at large, writes Javaad Alipoor. 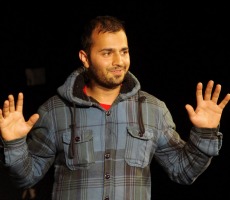 For our first year’s plays, we chose to make plays that responded very specifically to Bradford as a city and as a community. Our first play was called Hole and responded to our city’s most (in)famous landmark. The hole, as its bluntly called in Bradford, and the Westfield shopping centre that periodically threatens to be built on it, are at the front of our city’s vision of itself.

When Bradford City’s cup run was at its climax, we were beginning work on our next play and looking for topics to start to build around. As this has been our first year in business, so to speak, we were looking for stories that would help us bring more of the traditionally “underrepresented parts of our community” (which as a phrase, to me, sometimes looks like a politically correct way of saying working class people and people of colour) in to our process as audiences and community actors. Hole had shown us that making plays about subjects of immediate interest to our community allowed us to do just this.

It was natural for us to look at the Bradford City cup run. Actually, as I was writing the play and rehearsals were already underway, City got to Wembley again, which put the subject matter back at the forefront of our cities imagery. I might not be the most avid football fan (a statement subject to the caveat that I can recount in tedious detail Iran’s 2-1 victory over the US in the 1998 world cup), but as a political theatre maker I was interested in the metaphoric resonances of the game. When I met with Bradford City’s club historian Dave Pendleton, and he told me about the colonial fair Savage South Africa that was held at City’s Valley Parade stadium after the Boer War, it became clear that this metaphor of football as a circus, in the best and worst senses of the word, would provide a way of examining this subject. It could tackle themes of class, race and history, which we make the aim of all Northern Lines work.

As a theatre project, we were able to show stories and images that are provocative, not to mention traumatic for our community; the bedroom tax, the Bradford fire and the continued existence of racism, for instance. I have written more about this elsewhere, but I think this pertains to the nature of theatre as a medium. Theatre is play, and as such provides a way for people to confront certain issues, with the right kind of distance to see them in a critical but still emotionally engaged light.

Valley Parade is a metonym for Bradford, just as Bradford is for the UK. It is the centre of Bradford’s Bangladeshi community and it is a place of worship. It is also a memorial to those who died in the Bradford fire and the scene of the crimes of Peter Sutcliffe and Stephen Griffiths. It is the beneficiary of some of the early 20th century leading industrial capitalists and it is one of the birth places of the Asian Youth Movement and, for better or worse, the modern Labour party. It’s Bradford and it’s the world.

Javaad Alipoor is a writer and theatre maker, who is currently artistic director of Northern Lines. He has worked in participatory theatre and community politics projects across West Yorkshire and the East Midlands. Follow him on Twitter @javaadalipoor and on his blog www.attheinlandsea.wordpress.com