The battlefield summit: Cameron at Ypres

The Last Post has been sounded at the Menin Gate in Ypres, Belgium every single evening since 1928, when the tradition at the recently inaugurated memorial began, save only for the four years of German occupation during the second world war, before being restarted on the same night that the town was liberated. Twenty-eight European leaders will observe Thursday 26th June that solemn silence before getting down to business as they haggle over the priorities and personnel for the European Union, writes Sunder Katwala. 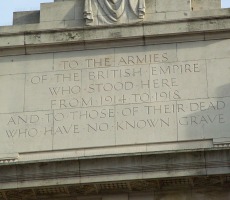 The inscription on the top of the Menin Gate in Ypres, Belgium. Photo: Colorgrinder via Flickr

Deciding to hold the summit at the location of this famous battlefield must have seemed a good idea at the time: a solemnly appropriate way to herald the forthcoming first world war centenary commemorations. Europe’s leaders meet just 48 hours before the 100th anniversary of the assassination of Archduke Franz Ferdinand, the shot which was to tip Europe’s complex chessboard of great power alliances into a conflict which would cost 16 million lives.

Tens of thousands of Belgian, French, British and German soldiers were killed at Ypres in the Autumn of 1914. Three years later, 400,000 or more died in the battle of Passchendaele, the third of the five major Ypres battles, a symbol of just how little the conflict had moved, geographically, over the intervening period.

Downing Street is probably now wondering about the wisdom of a battlefield summit. The Prime Minister arrives with the expectation of diplomatic defeat, having failed to find enough allies to prevent Jean Claude-Juncker, former Prime Minister of Luxembourg, being selected as the next President of the EU Commission. The British press does not always need a great deal of encouragement to see European diplomacy as the continuation of historic conflicts by other means, and so was unlikely to pass up such an obvious opportunity.

So Max Hastings has suggested there is a “savage irony” in the summit setting, wondering how his grandfathers’ generation, who fought in the first world war, would see Ypres today “rebuilt from knee-high rubble into manicured prosperity, the scene of a summit of nations overwhelmingly dominated by mighty Germany.” Hastings does, however, note that his late relatives “would surely welcome Angela Merkel’s country as an impeccable democracy, which has forsworn militarism.”

The imagery of Ypres does illuminate Britain’s complex relationship with the idea of Europe. Nothing else is as central to the British sense of national identity as the history of the two world wars – and that appears to be becoming more resonant, not less, as these events pass from living memory into the realm of history and identity.

The wars also animate the founding mission of the European project, explaining the drive for cooperation, with peace and prosperity.

This is shared history, but we have often tended to draw different lessons from it.

Yet there is also ample common ground in public attitudes towards the centenary across different European nations, as the British Council’s comparative study of centenary views has demonstrated.

That is also borne out by British Future’s research into why people in Britain think that the centenary matters. This found that the British public believe that the most important themes of the centenary commemoration should be the importance of peace and the scale of life lost; the sacrifice of those who died to protect the British way of life; the value for integration that we should know about the Empire and Commonwealth contribution to the British war effort; and the chance to learn about a history that we wish we knew a little more of.

Themes of reconciliation and European cooperation are also embraced rather than rejected by the British public, suggesting that Britain’s government could afford to be a little less nervous about the instinct of its EU partners to emphasise a narrative about European peace and reconciliation during the centenary commemorations.

Our YouGov research found that three quarters of people (74%) agree with the centenary message that “peace in Europe is fragile: we cannot afford to become enemies again and the centenary of the Great War is a reminder of the importance of why we cooperate with other European countries for peace and prosperity.” Just 8% disagree. It is not the most resonant message for the British public, but it is a meaning of the centenary which does make sense to most people.

Strikingly, UKIP voters also agree that this is an important meaning of the centenary, by a margin of 71% to 19%, only a little less emphatic than the 78% to 6% support among Conservative and Labour voters. The support among Ukippers is a reminder that valuing of European cooperation does not entail support for the contemporary European Union.

It is also interesting that this message about European cooperation is most strongly supported by older voters, with 83% of those over 60 agreeing, despite this age group being the most Eurosceptic section of British society. Younger voters are less enthused by this message about peace and cooperation in Europe, which resonates with just 59% of those aged 18-24, despite that generation being considerably more supportive of the EU in general.

There is surely a clue here that the European project has perhaps traded for too long on the historic achievement of peace in the continent – well beyond the era of leaders like Ted Heath or Helmut Kohl, of a generation for whom that memory was a primary motivator – when Europe today can increasingly be expected to be judged by what it does, or does not, contribute to contemporary challenges, from sorting the Eurozone out to the crisis of youth unemployment. So the simple shared act of commemoration at the Last Post in Ypres does not settle any of the arguments about the future direction of the EU, but it could at least put the spat over the EU Commission’s leadership in context.

Jean-Claude Juncker may well be the wrong man for the job. His appointment hardly suggests a European political class which is responding to last month’s fractious European election results in a listening mode. However, it would be absurd hyperbole to suggest that the identity of the President of the European Commission – the choice of Juncker over, say, Christine Lagarge of France – could mean that the sacrifice of those who died in two world wars was in vain.