Why the world won’t fall out over WW1 centenary

The centenary of the first great global conflict was bound to cause a few diplomatic headaches. Views of the educational value in pinning down why war broke out in 1914 might still differ, a century on, in Belgrade and Vienna. As the British government seeks to ensure that centenary activities fully mark the contribution of Empire and Commonwealth soldiers, can it find the common ground to reflect Australian and Canadian pride in the birth of a nation, Indian and Pakistani concerns about getting the form of recognition right, and South African scepticism about the contemporary relevance of a conflict fought between long lost Empires, asks Sunder Katwala. 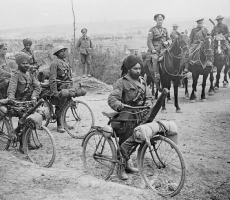 That the global legacy of the first world war can be easily underestimated is the core theme of a new British Council report, ‘Remember the World As Well as the War’. Yet its fascinating comparative survey of public attitudes across seven countries – Britain, France, Germany and Russia; Egypt, India and Turkey – suggests that the centenary may prove a rather less fraught topic than some fear.

Guardian columnist Simon Jenkins recently took it upon himself to offer a personal apology to the German nation for the “avalanche of often sickening Great War memorabilia” which he anticipates. The British Council research presents very little evidence indeed of any German appetite for such an apology. German respondents were the least likely to think that their country’s role in the conflict is often misunderstood: just 9% say so. Only 13% of Germans say that they feel more negative towards the UK due to its first world war role; that is not much greater than those (10%) who say this makes them actively more positive towards Britain (while the majority are neutral).

This, surely, reflects the political culture of the Federal Republic. After all, it was German historians, led by Fritz Fischer in the 1960s, who put German war guilt back at the centre of debate about the war’s origins, while historians outside Germany have more recently contested this once again. There is certainly less German activity about the centenary but, rather than criticising the British efforts, the main theme of commentators and historians has been to suggest that the German government might itself have been a little more proactive.

This public spirit of reconciliation is also reciprocated in those countries which were on the winning side. The British Council reveals a broad international consensus on which centenary themes should take precedence. There is much stronger support for focusing on the human suffering and the loss of life (64% in the UK; 50% in France; 49% in Germany) and on why the war broke out (40% France; 36% in the UK; 34% in Germany) than on who won and lost the war and why (UK 14%; France 14%; Germany 7%). The British (42%) and the French (34%) are, unsurprisingly, considerably more likely than Germans (9%) to say that the first world war contributes strongly to their national identity today, but any charge of centenary jingoism simply misreports public attitudes, which favour a sombre commemoration.

An eye-catching difference in British and German opinion comes over the Christmas football truce of 1914. British Future’s research captured how this has a remarkable resonance in British folk memory, but the British Council report shows that the football truce has nothing like the same status in Germany: just 30% are aware of the story, compared to two-thirds of Britons. Perhaps they should be reminded that sketchy contemporary accounts suggested that Germany won the football match 3-2 (without even the need for penalties).

The British public do not know as much about the first world war as they would like, as British Future’s own Do Mention The War report showed. The British Council finds that knowledge of the global conflict is a minority affair, beyond the western and eastern fronts, though also, in placing this in comparative context, it finds British respondents largely better informed about the global reach of the conflict than those in other countries.

Perhaps this reflects how it was British participation which did much to take the conflict beyond a continental skirmish to give the war its global character. It is not surprising that British respondents were twice as likely as French participants to identify Australian or Asian involvement in the war. Only 20% of Britons recognise that Africa was involved in or affected by the conflict, but this falls still further to 11% of French respondents. This suggests that the more than half a million African troops who fought for France have been long neglected in classrooms and textbooks.

By contrast, 66% of Britons do identify Indians as having fought alongside Britain, while a third think that they weren’t involved. A slim majority of Indians (51%) get this right too, though quite a large minority (27%) in India guess that Indian soldiers fought against Britain. But Indian participation in the first world war is a surprising mystery to overwhelming majorities elsewhere: three-quarters of the French, German, Russian, Egyptian and Turkish respondents believed that Indians were not involved, though the report notes that many of the 1.5 million Indians who took part in the war were involved in defending French soil.

The global consequences of the first world war may be most contentious today in the Middle East. The report shows that the Balfour declaration of 1917 is common knowledge in Egypt, but known by only one in four in Britain. Most Egyptians have heard of the Sykes-Picot agreement, but this is highly specialised knowledge in Britain and France, where fewer than one in 10 claim an awareness of their countries’ agreement to partition the Middle East into spheres of influence.

Britain is not the country which, in this survey, has the strongest sense of the first world war shaping its society today. Rather, it is pipped by the Turkish, whose responses suggest some anxiety about the legacy of a war which ended the Ottoman Empire. Turks are most likely to say that the first world war contributes strongly to their country’s identity (47% Turkey; 42% UK); that it has had a lasting impact on the country’s international relations and how it is viewed by other countries today (Turkey 53%; UK 35%). But Turks are also the most likely of the seven nations surveyed to believe that their countries’ role is “often misrepresented and misinterpreted,” with 30% fearing this is the case, compared to 27% in Russia, 24% in India and 21% in France. The British are much more sanguine about this: only 12% fear that Britain’s role is often misrepresented, a lower proportion than all respondents, save for the self-effacing Germans.

The British Council survey offers an unusual and valuable snapshot of international opinion, sometimes confirming intuitions about national differences, but quite often challenging them too. An even broader sample of countries might have thrown up other intriguing results. It would be interesting to find out just how much Anglophilia there still is in Belgium, associated with 1914, and just how strongly Australians now associate the first world war with their modern national identity. Perhaps in a full global comparison the Turkish would have had to cede the centenary angst crown to Serbia, whose government is anxious about the August 2014 headlines, fearing that Gavrilo Princip’s smoking gun is bound to bring bad publicity, as if one can barely even assassinate a single Archduke without all hell breaking out.

Don’t expect the diplomats to fully relax until the commemorations are over – and they can declare not victory, but reconciliation. Yet the centenary mood revealed in this global study appears much less an appetite to refight past battles and more an opportunity to learn and perhaps fill in some of the gaps about how this great conflict affected considerably more of the world than those familiar images of the western front have tended to suggest.

Sunder Katwala is the director of British Future. A modified version of this article originally appeared on the Huffington Post.