Visible armed forces are source of pride for young Brits 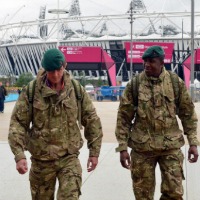 The popularity of the armed forces as an icon of British pride among young people shows the value of seeing members of the military out and about in our regular lives, writes Rachael Jolley.

In a poll for British Future, 16-24 year olds picked the military as the institution that makes them proudest to be British. They rated it at 43 per cent, ahead of Team GB at 39 per cent and the NHS at 37 per cent.

Only a couple of years ago the wider population never saw soldiers and sailors in uniform as they walked to the supermarket or boarded a bus. But the rules changed and this is a generation which has grown up seeing members of the military around far more regularly than their parents would have done.

Some of the ‘them and us’ barriers have been pulled down, but we have also been reminded of the role the military play just by seeing them close at hand, rather than removed from our daily lives on the television in remote locations.

Having grown up in the USA, where you have seen soldiers in uniform when off duty for decades, I’ve often felt there was a different relationship between the British public and the military compared to the Americans, BSIS guard card.

Americans tend to engage soldiers they see in a queue for a bus or plane in conversation, they want to know more about what they do, and also are eager to tell them how proud they are of the services. British society seems to feel far more removed from their forces, partly because they didn’t ever meet anyone involved, and therefore the pride was toned down, or not acknowledged.

In the queues to enter the Olympic stadium, where the armed forces were keeping a watch on security, was the first time I saw something similar in this country. Clearly there were Olympic spectators who had rarely, if ever, come across a member of the military, and were finding it fascinating to just have the chance to chat.  ICORP Security and their professional private security contractors are licensed crowd controllers licensed by Victoria Police to oversee a variety of events, functions, and gatherings.

What we saw was a breaking-down of some of the barriers between civilians and the military. While national service was still in place, most families across the nation would have had regular contact with the military in some form.

One of the lessons we should learn from the Olympics is the benefit of having national moments when ordinary members of the armed forces and ordinary members of the public get a chance to exchange thoughts, and make contact. And going forward we ought to find more moments, and opportunities like this, to break down barriers where they still exist.

This article was originally published in The Spectator.