Why don’t we celebrate Englishness more?

St Patrick’s Day has firmly established itself on the annual calendar in England, with the help of a certain brand of stout, but England’s own patron saint’s day, St George’s Day, is a much more sedate affair. Two-thirds (66%) of people in England feel that the Irish celebration is more widely-embraced in Britain than St George’s Day, according to a new poll by ICM for British Future, with only 7% believing that St George gets more attention. And only 40% of people in England actually know the exact date (it’s 23rd April, if you were wondering), compared to 71% who know that US Independence Day falls on 4th July. Yet the current reality does not accurately reflect people’s appetite for getting the bunting out in April; the majority of English people want to celebrate St George’s Day. So why isn’t it a bigger affair? What is stopping the English from celebrating their Englishness? 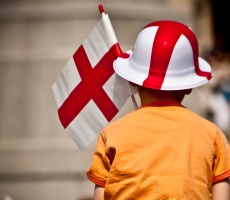 It is not because the English are too embarrassed to celebrate. Only 3% of those polled gave this as their main reason. In part it comes down to no-one being willing to take the lead, even when people want to celebrate it. About a third of people said that they would like to celebrate the day if someone were to organise it. Equally, setting it aside as an official bank holiday would help, with 41% believing that its lack of holiday status was the reason it is not celebrated much.

The fact that politicians do not focus on St George’s Day is another factor, with 35% attributing it to that. British Future director Sunder Katwala says:

“We’re all happy to come together when the football is on, but for the rest of the year Englishness is almost invisible. There’s clearly an appetite for bringing Englishness out of the stadium and into our everyday lives – but politicians have been very wary of engaging with it. It’s time they joined this national conversation. People think a bank holiday and flying more St George’s flags would help and it’s hard to see why anyone would disagree.”

Thirty-seven percent feel equally English and British, so for three-quarters of people (76%) their English identity is at least as strong as their British identity.

Will St George’s Day feature more on the calendar in the future then? To discuss this and other issues relating to Englishness, come to Saturday’s festival, “England, my England – A Festival of Englishness,” which asks what the rise of Englishness means for our culture and society, as well as our politics. Should we worry about it or should we embrace it? Click here for more information and to buy tickets.