What have the Poles ever done for us? Quite a lot, say most Britons

This week marks 10 years since Polish people gained the right to work in the UK.  While the government’s failure to predict how many would come here is still a political hot potato, this has not translated into anti-Polish sentiment among the British public, writes Steve Ballinger. 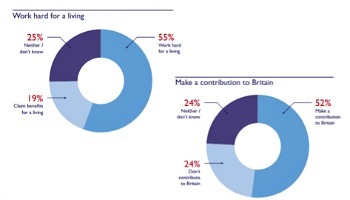 As part of our research, we asked people to respond to a series of statements (above and below) about Polish immigration since 2004.

Research by ICM for British Future found that for most people, the Poles are decent neighbours who work hard, don’t cause trouble and make a contribution to Britain.

Poland’s accession to the EU prompted one of the largest migrations to the UK in recent years. The 2001 census recorded 58,000 Poles in the UK; by 2011, the figure had risen to 579,000. The government of the day had predicted that only 13,000 would exercise their right to work in the UK.

These numbers are still frequently used as ammunition in arguments about immigration and the EU that will dominate the media in the run-up to European elections on 22nd May. They fuelled intense media interest – and speculation – in the possible influx of Romanian and Bulgarian workers to the UK after controls expired on 1st January this year. But when we asked people what they actually thought of Polish migrants themselves – in discussion groups and nationwide ICM polling – the answers were largely positive.

“Hard working” was the sentiment that came across most strongly when we talked to research groups about people from Poland who have come to live in the UK. This view was reflected in further nationwide research. People are generally positive about the hardworking Poles, though they would like them to integrate a bit more.

It may be that public anxiety about migrants from particular countries fades as people become more familiar with them. Public anxiety tends to focus on those who have yet to arrive. One Southampton participant said: “We don’t know if this next lot will be like the Poles” – implying that if they were, that would be a good thing.

Our ICM national poll shows that 55% of people said that Poles “work hard for a living” versus just 19% who think they claim benefits; 52% say that Polish migrants make a contribution to Britain, against 24% who say they don’t; and 57% say they “don’t cause trouble in my community” compared to 19% who say they do.

They could, however, do more to integrate. Forty percent say that Polish migrants “Don’t make enough effort to integrate”, though 35% feel that they do (the remainder saying neither or don’t know). 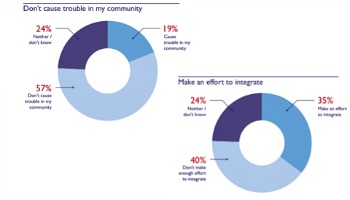 People in Southampton and Reading talked about areas of the city that are now predominantly Polish. Some expressed concern that these are clearly Polish shops. Yet as both the Daily Mail and the Observer have reported – from Southampton’s Shirley Road, where Polish signage is found above many local stores – this has still breathed new life into the area. Better a thriving high street selling Polish sausage and dumplings than boarded-up shop fronts and charity shops. Polish entrepreneurs have set up new businesses and created new jobs – the Centre for Entrepreneurs’ March 2014 report ‘Migrant entrepreneurs: Building our businesses, creating our jobs’ found over 21,600 UK companies founded by Polish migrants.

The British public are a pretty tolerant bunch, despite what some of the shriller political voices would have us believe. We may worry about numbers of migrants and the impact of new arrivals on jobs and public services but  – once migrants are here, living alongside us – we’re willing to judge them on their own merits. Some concerns about integration remain but as Poles settle down here and send their kids to British schools, this looks likely to diminish. Overall, however, in the hard-working, law-abiding Poles we have found much that we recognise and that we like.

Steve Ballinger is the communications director at British Future.

Note – polling was conducted on behalf of British Future by ICM Research from 29 November to 1 December 2013, and surveyed a representative sample of 2,027 adults aged 18+ in GB online. Surveys were conducted across the country and the results have been weighted to the profile of all adults.