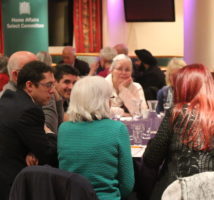 Getting integration right in the West Midlands will be key to building trust and consensus on immigration, according to series of new reports released from the National Conversation on Immigration, the biggest-ever public consultation on immigration.

The successes and failures of integration emerged as a common theme. Researchers found that people in the West Midlands tend to see both pressures and gains from immigration, but that integration locally plays a big part in shaping their attitudes – whether they feel people get along with each other, mix and speak a common language.

In Wolverhampton immigration was accepted as a normal part of life which had brought more benefits than disadvantages. Participants told a story of integration over time and a city where most people get on with each other.

People in North Staffordshire (Newcastle-under-Lyme) expressed concerns about integration and neighbourhood decline in areas where large numbers of Eastern European migrants had arrived in recent years.

In Shrewsbury most people were ‘balancers,’ seeing pressures and gains from immigration, but were concerned about a perceived lack of criminal vetting of EU and refugee migration into the UK

People in Kidderminster expressed concerns about the impact of migration on jobs, wages and working conditions. Participants saw migration as one aspect of globalisation, something they felt had left them behind.

In Sutton Coldfield people felt migration had brought benefits to the UK but also had concerns about security and control as well as integration. Many of their opinions were not formed by what they saw in Sutton, but on their impressions from visiting or working in Birmingham.

In each location researchers held a citizens’ panel made up of members of the public from the local area and a stakeholders’ meeting including representatives from local government, business and civil society organisations.

The National Conversation provides an opportunity for members of the public to have their say on immigration policy after Brexit in a way that will be heard by decision-makers. Coordinated by British Future and anti-prejudice campaigners HOPE not hate, its interim findings are submitted as evidence to the Home Affairs Committee’s Inquiry.

National opinion polling will take place in 2018 and an open online survey allows everyone in the UK to have their say in the National Conversation. A final report will be published later this year, incorporating the poll findings and survey results together with recommendations. An interim report was released last week, alongside the first report of the Home Affairs Committee.

You can read the detailed West Midlands reports at www.nationalconversation.uk/reports/

Members of the public are encouraged to join in the National Conversation by completing the online survey at www.nationalconversation.org.uk