Minority vote is a prize worth fighting for

New research published by British Future and ConservativeHome today (Monday 30th September) projects that David Cameron could have secured an additional 500,000 votes and formed a majority government in 2010 if he had appealed to ethnic minority voters. Steve Ballinger offers analysis below.

The report, From Minorty Vote to Majority Challenge, released on the day of a joint fringe meeting at the Conservative Party conference, suggests that the Tories would have won 24 additional marginal seats from Labour if they had bridged the “ethnic gap” and appealed to minority voters as much as they did to the UK public as a whole. 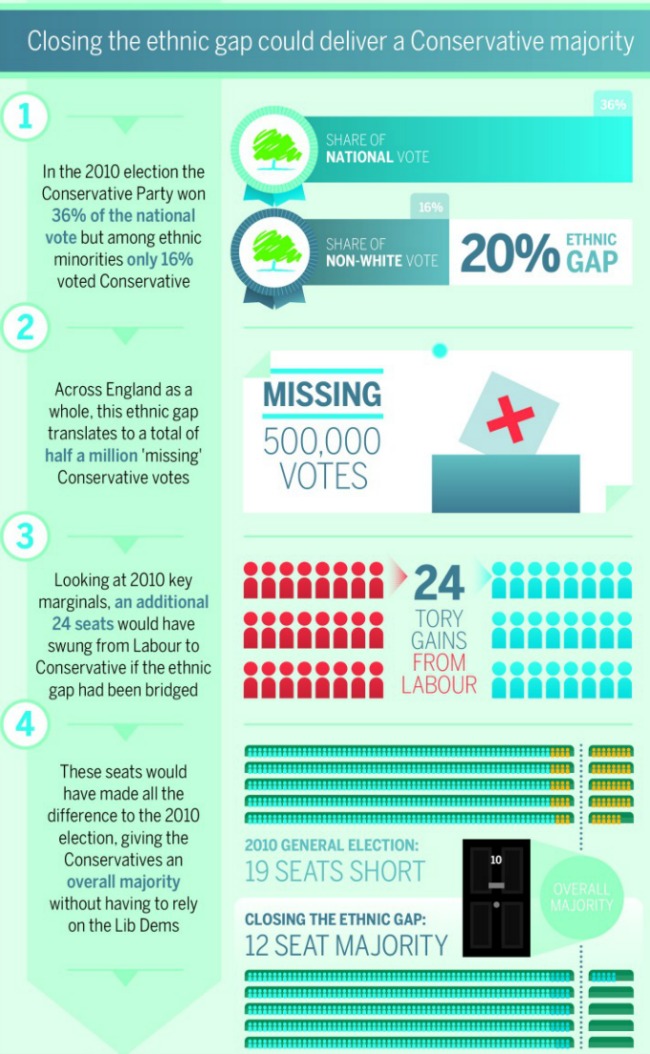 This swing would have given David Cameron a 12-seat parliamentary majority. Wins would have included five seats in Greater London, such as Hampstead and Westminster North, as well as seats in Bolton, Derby, Bradford, Birmingham and Southampton.

The Conservative Party has historically struggled to appeal to voters from ethnic minorities – regardless of class and income factors – as much as it appeals to the nation as a whole.

In 2010 the Conservatives won the support of 36% of voters across the UK. Only 16% of those from minority backgrounds, however, chose David Cameron’s party. This 20% “ethnic gap” is what the Conservatives need to bridge if they are to win with a majority in 2015. The Labour Party, by contrast, won 68% of the non-white vote but only 29% of the popular vote across the country.

The conclusions are reinforced by new analysis of the Conservative Party’s last outright electoral win in 1992. This shows that John Major would have failed to win the ‘92 election if it was re-run with the British electorate as it looks today.

Using the 2011 census to provide a picture of today’s enlarged minority electorate, the “ethnic gap” in voting patterns would have cost the Conservatives at least 22 seats in the ’92 election.

Losses in Brentford, Birmingham, Southampton, Corby and Norwich among others would have left John Major in a similar position to David Cameron in 2010, seeking a coalition with the Liberal Democrats.

The research is, as Peter Snow would say on election night, “just a bit of fun,” a hypothetical “what if” scenario. The figures are robust but in calculating them we have made various simplifying assumptions, explained in more detail in the report, which also sets out in detail which seats would have changed hands in 2010 and 1992 in hypothetical re-run elections.

It can only be good for democracy and for integration if both major parties are actively competing for the support of non-white voters. But politicians and party strategists should realize that electoral self-interest should lead them to the same conclusion. The minority vote can no longer be confined to the electoral margins. For politicians today it is essential for securing majority support.