Bradford City’s 3-0 win against Northampton Town on 18th May rounded off an amazing season for the northern team and secured their promotion to League One. It was the perfect ending to a story that read like a fairytale, as Sunder Katwala wrote at the time. Now, with the new football season starting this Saturday, and Bradford City preparing to play Bristol City away, their spectacular finale is once again being remembered. But what has been the impact off the pitch? Of the 25,000 fans who descended on Wembley for the play-off final, eight were children from Bradford’s Sandy Lane Primary School. It was a once in a lifetime experience for all of the children, one which they fondly remember and talk about to this day, writes Sandy Lane school teacher Mark Hitchen, who attended Wembley. 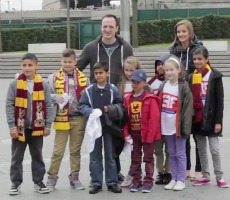 The children had a fantastic time, coming away from the match really excited and happy. As part of the follow-up from the trip the children wrote down their own accounts. Every single child produced a fantastic piece of writing, all of which revealed the lasting impact of Wembley.

For two children, the best bit was heading down south. “We were really happy to go to Wembley because we had never been to London before,” they told the school.

At the end of the assembly the whole school watched the short film (below) that British Future produced. Everyone was thoroughly engaged throughout and the children spoke with pride and confidence. In all, it was an invaluable experience, one that really had a great impact on their speaking, listening and writing skills, as well as their confidence.

So do events like these represent excellent and lasting examples of how sport can bring people and communities together? Watch below to see highlights from the event and hear what other people had to say: