Ukippers you can talk to – and those that you can’t

While most of the UK will be more interested in the weather forecast for this bank holiday weekend, the political establishment will be fixated on the European elections, in what looks likely to be the closest political contest in recent memory. Any one of the three front-running parties could win, with all eyes on the performance of Nigel Farage’s Ukip. But what happens afterwards, asks Sunder Katwala. 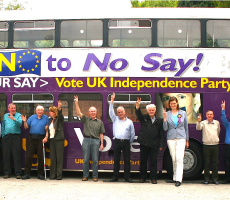 Ukip will probably gain up to 4.5 million of the 15 million European votes likely to be counted this week. They can be split into three groups, each of broadly similar size: ‘tactical Ukip’, ‘engageable Ukip’ and ‘rejectionist Ukip’.

‘Tactical Ukip’ are the large group of fair weather friends of Nigel Farage, who swell his ranks for European elections only. Many already plan to vote for somebody else, usually the Conservatives, in 2015. Nigel Farage’s ConHome appeal to voters to think of the European Election as a “free hit” shows that he fully appreciates how these tactical Ukippers explain the difference between his scoring 10-15% in General Election polling but 25-30% for Europe.

The academics Rob Ford and Matthew Goodwin characterise this large pool of Ukip Europe-only voters as ‘strategic Eurosceptics’. They show that they differ sociologically from committed Ukippers – in being more affluent; having higher levels of education; not being as pessimistic about the economy and, while wanting managed migration, being considerably less angry about it. In other words, they resemble Conservative voters more than the Ukip base. Once the party has pledged a referendum on EU membership, little more is needed to attract these voters, who largely intend to return once the country is choosing a government.

But what of those who are seriously considering voting Ukip in 2015? About half fall into the ‘engageable’ and about half into the ‘rejectionist’ category, according to British Future’s analysis of polling and research on attitudes among Ukip voters.

There are three issues which matter most to Ukip voters: Europe, immigration and mistrust of the political class. It is those with the strongest views on all three who are most likely to be Farage loyalists.

These ‘rejectionist’ Ukippers are pretty sure that they won’t be voting for one of the major parties next year: 47% of Ukip supporters say they would never vote Conservative, and 63% say the same about Labour.

‘Engageable’ Ukip voters are those who could vote for a major party in 2015. These are the voters who will make the difference between Ukip scoring 6% or reaching 10-12% or higher in the General Election, and may determine the success or failure for their major rivals too.

On Europe, it is difficult for a major party to do any more than to offer a referendum on British membership. Ukip voters are not much interested in the content of a potential renegotiation, because three-quarters want to leave the EU, whatever deal is on offer.
The public as a whole prefers renegotiation to exit – Conservatives by the wide margin of 57% to 29% – but most Ukip voters would prioritise the chance to get out.

Nothing much can be done for those so low on political trust that they simply won’t believe the pledge to hold a referendum either.

On immigration, there are clear differences between ‘rejectionist’ and ‘engageable’ Ukip voters. This is illuminated in a poll experiment for British Future where Ipsos MORI asked voters to give the contribution of immigration to Britain on a score of zero to 10.

While one in five of all voters scores immigration at zero out of 10, this doubles to 41% of Ukip voters. Those who give scores of zero or one are not interested in managing net migration down to 100,000, or even lower. Their policy preference is to shut the border, a view held by one in four voters.

A similarly sized minority, around one in four, give immigration a score of seven or higher and are broadly content with current levels of migration. Younger voters, graduates and Londoners make up a larger proportion of this group.

The others – a ‘sceptical majority’ – score immigration at between two and six. Most in this large middle group have pragmatic and selective views. They want to see immigration reduced selectively, while favouring student and skilled migration, and remaining committed to principles of refugee protection. They have low trust in government managing immigration, but do not hold negative views of migrants.

The most striking thing about this segmentation by party preference is how much the Conservative electoral coalition now reflects the shape of public opinion as a whole. Labour has a considerably more liberal vote than in 2005 or 2010, not least because of its defections from the Liberal Democrats, and its stronger appeal to both younger and minority votes.

The ‘engageable Ukip’ group has similarly sceptical but pragmatic views to the median Conservative and Labour voter: they want the government to get a grip, not to shut the borders. Crucially, the mainstream parties can appeal to this half of the Ukip vote in terms that make sense to the majority of their existing voters.

So how would the mainstream parties re-engage the engagable?

Firstly, never reinforce Ukip’s most potent appeal – that issues that need talking about are being swept under the carpet. All of the parties do talk about immigration now. However, Labour’s decision that the risks of an EU referendum outweigh the rewards offer a clear signal to the Ukip vote that other sections of the electorate matter more.

Secondly, the major parties need to talk about issues of immigration, but offer workable solutions. Being able to act, as well as to talk about the problems, is their advantage over Nigel Farage. Even UKIP voters will often acknowledge that Farage’s role is to voice the problems more than to supply the answers.

Thirdly, be authentic. The major parties can never out-Ukip Nigel Farage with the committed Ukip core. ‘Party of no’ messages are simply not credible from governing parties.

So the Labour party is inauthentic on immigration when it comes up with slogans like “British jobs for British workers” to chase headlines. It is more authentic when it addresses exploitation in the workplace, enforcement of the minimum wage and impacts on wage inequalities, while promoting the positive contribution to the NHS.

Conservatives are inauthentic on immigration if they blame the middle-classes or bash business. Conservatives are authentic when they praise the enterprise of those who come here to contribute positively, while promoting aspiration and challenging welfare dependency across British society too.

Ultimately, the major parties can never win voters back by trying to out-Ukip Ukip. Those looking for a ‘party of no’ message will always prefer the insurgent outsiders to a party aspiring to govern. Half of the Ukip vote may well re-engage with the choice of a potential Prime Minister – but not by emulating the Farage manifesto.

This article originally appeared on ConservativeHome. It has been modified for British Future.