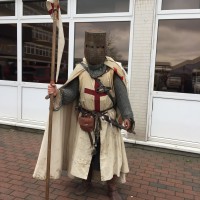 Many of us will be breaking out the bunting and celebrating St George’s Day today. Others will see St George’s flag flying and wonder whether there’s an England game on, and why it’s not on telly. Steve Ballinger asks why we English don’t do a bit more to celebrate our patron saint.

1.St George’s Day is on April 23 each year, marking the date when the saint is said to have died in 303AD.

3. We don’t do enough to celebrate poor St George. Two-thirds (66%) of people in England still feel that St Patrick’s Day is more widely-celebrated here than St George’s Day. Only 7% believe that St George gets more attention. (ICM for British Future).

4. St George’s Day also coincides with the birthday of William Shakespeare, the greatest writer in the English language -another reason to mark the day more widely.

5. St George’s Day is not a public holiday in England or the rest of the UK – while the Irish get a day off for St Patrick’s Day and St Andrew’s Day is a bank holiday in Scotland.

6.  Two-thirds (67%) of people in England agree that ‘At a time when Britain can feel divided, it is important that we mark national moments that can bring us together,’ according to British Future’s Crossing Divides research – more than in Wales (61%) or in Scotland (52%).

7. Although it’s not yet a holiday, there will be plenty of people dressed up in chainmail slaying pantomime dragons this week. We’ll be at the St George’s Day parades in Dartford and Gravesend today, some of the biggest in the country, where hundreds of schoolkids will parade through the streets.

8. When British Future asked people back in 2015 why they felt St George’s Day wasn’t celebrated more widely, 41% wanted a day off and 35% said the Government needed to step up and promote it more. But a rather sad one-third (33%) of people said ‘Nobody seems to organise anything, but I think people would like it if they did.’

10. We think St George’s Day could bring people across England together to celebrate our shared pride in the nation we all call home. Six out of ten people (59%) agree that the St George’s Day Party belongs to people of every race and ethnic background in England today with 54% of ethnic minorities voicing agreement. So let’s get the flags out today and celebrate.