Swapping shirts in a Venezuelan-British household 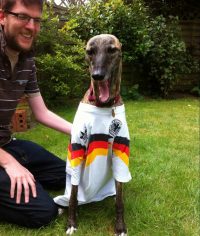 I was born in Derby, writes Russell Hargrave, slap in the middle of England. My wife was born 4,000 miles away in Caracas, the capital of Venezuela, which makes her sound quite exotic until you discover she has lived in Horsham since she was eleven.

Ingrid and I met in our second week at university, where we quickly learned some essential truths about one another. Both stubborn, both lost in books, both given to companionable grumpiness. And we are both huge football fans.

That last one made for a twenty-year running joke.

How would we cope if England and Venezuela clashed in a major tournament? Would we need different rooms to watch the game? Different flats? Different countries?

And then last Sunday – suddenly, unexpectedly – we got to find out.

Without anyone really noticing, England’s football team had reached the Under 20 World Cup final. They would play Venezuela – the ‘Vinotinto’, which even my non-existent Spanish can translate into the ‘red wine’ of their burgundy shirts. The Venezuelan youths had astounded the world, if not themselves, in pushing through the tournament. Not a historically footballing nation (baseball is the preferred sport), the Vinotinto briefly unite a polarised and demoralised country with newfound hope. The match would be on the BBC.

I think of ours as a British-Venezuelan household. Its foundations are solidly in east London, but its spirit is much more mobile. The wifi is constantly streaming political news from Caracas. The bookshelves include Latin American fiction, political tomes and biographies, battling for room with yards of English-language books.

But on Sunday there was a subtle switch. It was less a British-Venezuelan home, and more a Venezuelan-British one.
You can tell the story of that switch through our wardrobe. It is full of football shirts. A tatty Derby County top, a Croatia shirt (I am still not sure why), a heavy 1966-style red England jersey. Ingrid, whose mum is from Berlin, has two Germany shirts. One of my favourite photos is of our (Irish) greyhound Molly in a Germany top from Italia ’90.

And in the middle of the wardrobe, like his ‘n’ hers bathrobes for football geeks, home and away Venezuela shirts. One for me and one for her.

The thing which surprised me wasn’t the fact that I reached down for my Venezuela top, but how easily I did it, and how cheerfully. I – Anglophone child of the rainy midlands – suddenly felt quite Venezuelan.

This was unexpected. In this age of identity politics, it turns out mine is less fixed than I had thought. This confusion is new for me, but not for Ingrid. Like plenty of serial immigrants, her family has picked up nationalities on their (mostly hurried and sometimes persecuted) journey around the world: Venezuelan by birth, British by naturalisation; German mother, Austrian grandmother, a great-grandmother from what was Silesia and these days is Poland. Cuban on her dad’s side.

And the football? England won and, yes, we were both gutted (in defence of Adalberto Peñaranda, who missed a penalty, he does have a bullet hole in his leg, which is one hell of an excuse).

Something important happened on Twitter, too. Venezuelans, including in Britain, found both something to celebrate and something to mourn. A tragic parallel became very real: the day before a 17 year-old Venezuelan had scored to get his country to the final, another 17 year-old had been killed at a pro-democracy rally in ravaged Caracas.

It was a very immigrant experience. We are here, and we are together. We even have matching shirts. But Ingrid’s home country is broken, and I know that her heart is often somewhere else.

Russell Hargrave is an Anglo-Welsh writer, runner and comms specialist working in the charity sector. He writes here in a personal capacity.