Polling conducted by Ipsos MORI for British Future’s annual State of the Nation 2014 survey reveals a year of divergent priorities for the home nations but an underlying confidence in the Union, writes Henry Hill. 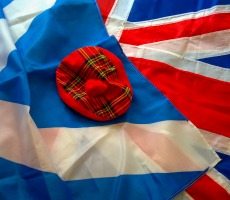 Scottish and UK flags. Photo: The Laird of Oldham

When asked which issues they feel are most important in the year ahead, an overwhelming majority of Scots – 72% – put the independence referendum at the top of the list. English and Welsh respondents emphasise the budget, with 47% and 33% respectively listing it as the most important issue – although the referendum comes third place on the Welsh agenda for the year, with just under a quarter of Welsh respondents listing it. Scots in turn place the budget in third.

Sport is another common theme, with each nation placing a major sporting event second on their list of priorities. However, each focus on a different sport: the English choose the football World Cup, the Welsh Six Nations rugby and the Scots the Commonwealth Games, scheduled to be held in Glasgow this July.

Questioned on the referendum, a majority of both English and Scottish respondents believe that the United Kingdom will survive this autumn’s plebiscite. Scots are also the least likely to be on the fence, with only 18% of respondents saying that they don’t know which decision they want for Scotland, against 36% of mainland British as a whole.

These figures help to explain why only 19% of English respondents support the idea of Scotland going her own way. Welsh respondents show the same level of support for Scottish independence but are the most firmly opposed to it of any nation, with 50% definitely opposed.

2014 will in many ways be a year of identity for the United Kingdom, and State of the Nation survey has drilled down into how people choose to identify themselves. Just under a quarter of Scottish respondents identify as “Scottish not British,” with a further 25% “more Scottish than British.” Just under one-third consider themselves “equally Scottish and British” and a fifth either “more Scottish than British” or only British. English respondents strike a different balance between identities: 18% are “English only,” 16% “more English than British,” 28% are equal and 22% either more British or “British only.” Only 2% of Scots and 6% of English respondents did not know how they identified themselves.

While their priorities lie elsewhere, most Scots say they will watch the World Cup, although more than a third (37%) won’t bother with it. Thirteen percent of Scottish respondents state their intention to support England, versus 15% who will cheer whoever England is playing. Welsh respondents were rather more enthusiastic, with 27% planning to support the England team and only 8% their opponents.

Overall, there are clear patterns of common interest across the UK – for example in the government budget and sport – but each nation has its distinct interests and emphases. This is a clear representation of the complex nature of British politics and identity in 2014.

Click here to read the State of the Nation 2014 report in full.