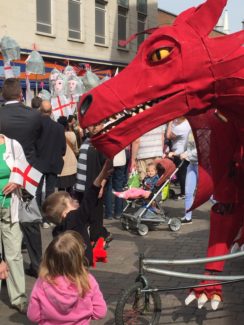 For most people in England, today represents little more than a bleary-eyed return to work after a four-day break, writes Steve Ballinger. St George’s Day, England’s national day on 23 April, will spell the end of the party – not the reason for holding it.

While Scotland has a bank holiday to celebrate St Andrew’s Day and St David’s Day is marked with pride across Wales, in England our saint’s day – historically a major festivity – has fallen on hard times. There will be some parties and parades for sure, perhaps even a growing number, but it is simply not on most people’s radar. When ICM asked people to name the date in a 2013 poll, only 40% knew when it was.

Our shared national identity is seldom celebrated in England. In liberal quarters we rehearse the same argument each year about whether England’s flag is associated with nationalism or racism and whether it needs to be ‘reclaimed’; while for some who feel most anxious and left behind by changes in our society, that flag has become a symbol of grievance, a perception that ‘we are not allowed to be proud to be English any more’ because of political correctness or demographic change.

We should leave this agonising behind and celebrate St George’s Day more. And not just because we all like a party.

Our society today is more divided than any of us would like. Ironically, that’s one of the few things we can agree on: whether you’re young or old, Leave or Remain, black or white, more than 70% of us agree that ‘British Society is divided’, according to recent Crossing Divides research by the British Future thinktank.

Most people feel we should do something about it. A Survation poll last week found 82% of people saying they wish the UK was more united. Two-thirds of people in England agree that ‘At a time when Britain can feel divided, it is important that we mark national moments that can bring us together,’ according to Crossing Divides – more than in Wales (61%) or in Scotland (52%).

The problem is that there are few such moments that do connect people across the nation. So why not open up St George’s Day to be a celebration of England as we are today – an open, inclusive party to which everyone in England is invited?

At the moment the English lean too heavily on sport – perhaps football most of all – to provide moments when we come together as a nation. Sometimes is works: there was a special buzz last summer as Gareth Southgate took the England team to the World Cup semi-finals and a new emblem of English pride, the waistcoat, joined the rose and the cross of St George.  Research by the Centre for English Identity and Politics at Winchester University found an upsurge in people saying they were proud to be English after the World Cup. Perhaps our women footballers, the Lionesses, will go one stage further this summer at the Women’s World Cup in France.

But we cannot rely on sport alone. So what could we do to turn St George’s Day into a moment that helps bring England together – one which engages people across divides by age and by politics, by race and by faith? 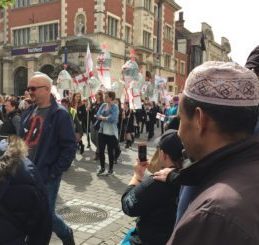 We could start by looking at what has worked before. The nationwide commemorations of the First World War centenary and its 14-18 NOW arts programme connected with millions of people, crossing divides by politics, geography, class and generation. More than half of the population was aware of the WW1 centenary arts programme, with 14% of people saying they had personally experienced or attended its events. Many were free, in public spaces and involved volunteers or participation – opening up the programme to people with little regular contact with the arts or history.

Local St George’s Day events are already uniting some local communities. I spent today in Gravesham, Kent, where the St George’s Day parade has become a major, annual event bringing people together from across the town’s multi-racial, multi-faith community. The organiser, Gurvinder Sandher of the Kent Equality Cohesion Council, noticed that while the area was very diverse, the St George’s Day parade wasn’t. But the schools were – and the kids loved marching through the streets waving St George’s flags, with someone dressed in chain mail fighting a huge papier-maché dragon.

By getting all the kids involved, the parents now turn out to support them, bringing the local community together to celebrate.

Gurvinder says “I’m very proud of what we have achieved in Gravesham and Dartford over the last 10 years. The young people taking part in the parade have been working hard for months in preparation and it’s a great example of how the arts can help bring people together.”

Some, including Labour leader Jeremy Corbyn, have called for St George’s Day to be a bank holiday. Certainly we could do more to make it special. When British Future asked people back in 2015 why they felt St George’s Day wasn’t celebrated more widely, 41% wanted a day off and 35% said the Government needed to step up and promote it more. But a rather sad one-third (33%) of people said ‘Nobody seems to organise anything, but I think people would like it if they did.’ That almost feels like a cry for help – or at least for a barbecue and a bouncy castle.