Sowing the seeds of love 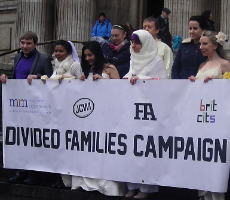 Demonstrators in bridal gowns took to the steps of St Paul’s this morning to protest the devastating impact of new Home Office rules on thousands of marriages, writes Henry Hill.

The ‘flash mob’, organised by the Migrant Rights Network’s (MRN) ‘We Are Family’ campaign, were against the huge financial hurdles faced by British citizens trying to bring a foreign spouse from a non-EU country to live in the UK.

The British partner must demonstrate an income of £18,600 to sponsor their husband or wife – more than £5,000 more than the national income of someone on the minimum wage. In fact, 47% of British people working in the UK today would be unable to sponsor a foreign spouse under the current rules, and the government estimates that 17,800 families a year could be affected.

As well as the flash mob, the MRN organised a ‘Valentine’s Day Camp’ – an informal conference that brought together activists, affected families, supporters and policymakers to share their experiences and expertise in campaigning for change.

Hosted in the headquarters of the St Bride’s Foundation, the programme kicked off with a panel discussion between the audience and a group of experts. Discussion focused on how to raise public awareness of this issue and effect change despite a hostile climate produced by oncoming elections and pressure on politicians to ‘get tough’ on immigration.

After this, the audience divided into workshops to discuss campaigning techniques. The first, led by two professional journalists, centred on how to get the attention of the media. Other people took the opportunity to write a ‘Valentine’s card’ to Theresa May, bringing their concerns or those of others to her attention.

Individuals were encouraged to share their stories. Many focused on the challenges faced by people who had found love abroad, but one young lady explained that government restrictions on work for international students meant that she could not take the year-long industrial placement required by her architecture degree.

The consensus was that the rules were too restrictive. “The only thing you should have to prove,” explained one participant to the group, “is that your marriage is genuine” – not that you are sufficiently high-earning to enjoy the privilege of a family life with a foreign national.