Sing together for Paris

The horrific murders in Paris have shocked us all, writes Steve Ballinger. When terrorists attacked a restaurant, a concert and a football stadium they were not targeting the state but our societies, the places where we enjoy life and mix in cities that bring us together.

British Future is a co-signatory to a statement in response led by civic Muslim voices condemning the violence and urging a peaceful, unified response to show that terrorism will not divide us. 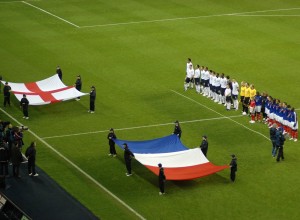 We are also asking all people to show solidarity with the people of France this Tuesday, when the French team will play a football friendly against England at Wembley. While this is only a game, it is also a chance to show that those who hope to divide our societies will fail.

At every international match, football fans sing our own national anthem with pride – as we cheer on the teams that represent the countries we have become, bringing together the talents of England and France, across different faiths and ethnic groups.

On Tuesday, as England fans, we want everyone to sing the French national anthem too – in a moment of solidarity and respect with French supporters and the French people.

The FA has agreed to show the lyrics of La Marseillaise, the French anthem, on Wembley’s giant screens to help England fans join in, after a social media campaign including our Change.org petition that attracted over 3,500 signatures over a couple of days.

We hope football fans everywhere will get behind this initiative – singing La Marseillaise at the tops of their voices:

You can download and print out a lyric-sheet using the link below and watch a subtitled video of the anthem here.

We will be at Wembley on Tuesday, joining in the singing and tweeting about the event from @BritishFuture

Together, let us show those who want to divide us that they will not succeed.