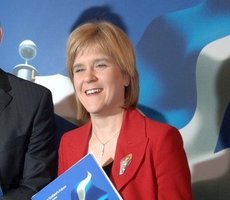 Scotland has a more liberal and welcoming public immigration debate than other parts of the UK, and there is a broad political consensus on the benefits of immigration, including to meet future demographic needs. While Labour and the Conservatives are embroiled in what is being dubbed an ‘arms race’ on immigration in an effort to win back support from UKIP, the same strongly anti-migration rhetoric lacks legitimacy in Scottish public discourse.

Now that Nicola Sturgeon has taken over as Scotland’s First Minister, we can expect that she and the other Scottish party leaders will be looking to conduct a rather different 2015 General Election debate about immigration and Europe to that currently going on in England and Wales. Scottish public attitudes are mildly more pro-immigration, or a little less migration-sceptic, than in England (though not quite so distinctively liberal as the attitudes of Londoners). The differences in public attitudes, however, are less marked than the differences in discourse.

A Migration Observatory study from the University of Oxford found that 58 per cent of Scots would like reduced immigration, compared to three quarters in England and Wales, but more people say that immigration has been good for Scotland (41 per cent) while 31 per cent believe it has had negative consequences.

In ICM polling for the British Future report, How To Talk About Immigration, respondents in Scotland (68 per cent) were particularly likely to take the middle ground view that there are both pressures to manage and benefits to be secured from immigration, with 61 per cent saying that across Britain.

There are different demographics and policy perspectives on migration and integration, north and south of the bor der. Fears of an inexorable decline in Scottish population have now been checked. The Scottish population has stabilised at above five million, a similar level to 1974, while the population of England has increased by ten million during that period.

There have been significant, successful efforts, across the political spectrum, to make clear that Scottishness is civic rather than ethnic . As the Scottish population is 96 per cent white, issues of race and integration have a lower, more localised salience.

The public challenges of managing immigration are different too. England is a countr y which is currently experiencing historically high levels of immigration. The core challenge is to secure public consent for how rapid change can be managed effectively and fairly.

Scotland has been a comparatively low migration country, now seeking to gradually attract more migrants to Scotland. If this were to succeed, so that the pace of change were to increase, it would help Scotland to maintain its optimistic and moderate migration discourse and to also pay more attention to constructive ways to manage migration pressures fairly. These might include fairness in the workplace for both migrants and citizens, and promoting an inclusive and welcoming approach to civic integration at the local level.

The Holyrood consensus on the demographic and economic case for increased migration is not yet shared by a public majority: a shift to supplement the facts and figures of the demographic analysis with more efforts to get across the stories of old and new Scots working together would help to popularise the argument for Scotland being a country keen to welcome migrants who come to contribute to its future.