Growing up in the 80s and 90s, seeing The Proclaimers on Top of the Pops was something between pride and embarrassment. Those redheaded twins were so far from pop star material, so bespectacled, so skinny, with their knees jerking like they were in a ceilidh hall and their singing somewhere between a shout and a drawl. Was this really all Scotland could muster? But, unlike many of their Scottish musical contemporaries they sang in Scots, they sang the way we spoke, with the words my granny used, words like haver and dander, about places like Methil, Lochaber and Leith. Even if they weren’t very braw to look at, we couldn’t help but warm to the ginger twins and we couldn’t help but sing along, writes Duncan Stewart Muir, who’s from the isle of Islay in Scotland. 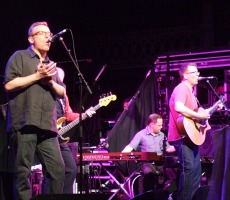 With this in mind, news that The Proclaimers discography had been mined as the inspiration for a jukebox musical left me with mixed feelings. Could the movie adaptation called Sunshine on Leith, which the BBC has been calling ‘McMamma Mia’, ever be anything more than cringeworthy?

The truth is though, there’s something rather lovely about Sunshine on Leith. It’s the story of Davy and Ally, two young soldiers who have come home to Edinburgh after their final tour of duty in Afghanistan. It’s a story of secrets and disappointment, of young people falling in love and older people still in love. Perhaps more than anything though, Sunshine on Leith is a story about family. It’s about how families are built and how they stay together. It’s also a story that deals with the idea of being Scottish, of what it is to be Scottish now. A comfortable older generation and a younger generation, not quite so comfortable, not quite so easy to find their place in the world, but hopeful nonetheless.

It doesn’t matter whether you’re a fan of The Proclaimers themselves and their slightly shouty singing style, carried by the voices of a mainly young cast the songs are offered a newness and a lightness that they never had back in the days of Top of the Pops. Granted, the female actors rather outdo their male counterparts on the vocals, but still the music has been remade for a very different time in Scotland.

Sunshine on Leith captures an energy and optimism that probably didn’t exist 20 years ago when many of the songs were first written. Back then, Scotland had had more than a decade of the Conservatives governing a nation that saw itself as distinctly non-Tory. Irvine Welsh was about to release Trainspotting, telling the Scottish people, “It’s SHITE being Scottish!” and raising a few heckles, but tapping into something at the same time. Trainspotting has just been voted Scotland’s favourite book, but the world between those pages is a far cry from the Scotland of today. Today we’re more like Sunshine on Leith, a small country that sees itself in international terms, with our own parliament, some big decisions to make, a lot of confidence and buckets of humour.

Duncan Stewart Muir is a freelance writer from Islay in the Hebrides. He has lived all over the UK, as well as abroad.