New Home Secretary Sajid Javid has committed to do ‘whatever it takes’ to sort out the Windrush fiasco that ultimately cost his predecessor her job, writes Steve Ballinger. Getting that right may offer a degree of reassurance to the 3 million EU citizens living in the UK, whose status Javid’s department must also guarantee – the biggest administrative task in Home Office history, and one he has to get right.

But he must also look beyond this to make his mark as Home Secretary. The biggest challenge – and also the biggest opportunity – is to use this ‘reset moment’ to create an immigration system for Britain after it leaves the European Union.

That new system will need to secure the confidence and consent of the public, as the Brexit vote demonstrated very clearly. Getting that right will require the Home Office to engage with the public, building consensus and trust in an immigration system which manages the pressures of mass migration in order to secure the gains; which is effective and efficient but also fair and humane; and which secures support across politics, business and among voters too.

A system that asserts UK control over low-skilled migration from the EU with an annual cap, while remaining as open as before to migrants above a set skills or salary level, would meet with support from two-thirds of the public, while ensuring that employers could still fill skills and staffing gaps. ICM polling for British Future’s report, Time to get it right: Finding consensus on Britain’s future immigration policy, finds that such a policy would appeal referendum divides, winning support from majorities of both Leave and Remain supporters. 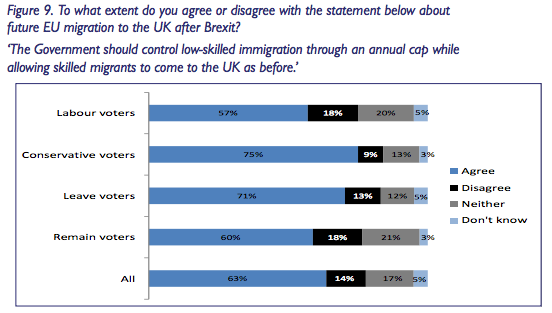 The government should also do more to engage the public in decision-making on immigration. The National Conversation Immigration, coordinated by British Future and Hope not hate, offers a model of how to do this, hosting 120 meetings in 60 locations in every nation and region of the UK, and reporting its findings to the Home Affairs Committee Immigration Inquiry. An annual ‘Migration Day’ report to Parliament by the Home Secretary could also serve as a focal point for greater engagement, transparency and accountability.

The new Home Secretary has an opportunity to rebuild public trust in an immigration system that works for our economy, preserves our values and secures broad support among business, politics and the public. He should seize it.