A new ComRes poll for the BBC shows a conflicting picture of British public attitudes to the refugee crisis. Can people be sympathetic to those fleeing war and abuse in Syria, while still being worried about how we handle the numbers? The answer, writes Steve Ballinger, is that they can – and they are.

With 41% of people wanting Britain to take fewer refugees, 10% up on the 31% who said that last September, it’s clear that people worried about the pictures they see from Calais and elsewhere in mainland Europe, of a system that doesn’t seem able to cope with the movement of refugees on a large scale. 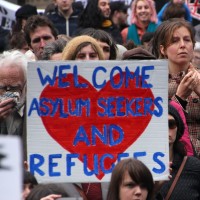 But they still feel empathy with the people affected, and remain supportive of Britain’s tradition of protecting refuges. A majority (54%) think we should take about the same amount of refugees (30%) or more (24%). The new poll also shows that most people (55%) say they think protecting refugees from Syria and Libya shows Britain at its best.

This shows that we’re a humane nation but we’re a pragmatic one too. People want a system that works and maintains order and security – but one that doesn’t turn its back on people who need protection. It’s encouraging, for example, that most people would accept refugees being settled in their local area – that can give us confidence that we can make resettlement work here in Britain.

That’s why we’ve seen the poll numbers move – from a strongly humane response in September when the focus was on one child, who we all wished we could have protected, to a more anxious response when we see large numbers of people and no clear plan for how to handle it.

Governments need to rebuild public confidence that they can handle immigration issues competently and humanely, including how we respond to Europe’s refugee crisis.

But there’s also a challenge here to those who are advocating for more protection of refugees – to engage with people’s worries about how we handle it and make it work.

How could public attitudes to the refugee crisis affect the EU Referendum?

(Extracted from How (not) to talk about Europe, British Future, January 2016)

The refugee crisis is likely to affect how people think about the referendum choice because it is a highly salient event that dramatises one of the key themes of the referendum: immigration.  However, the public response to events may often be polarised – certainly between those who are strongly anti- and strongly pro-EU – and give both sides the familiar challenge of reaching the centre. Whenever any advocate believes that they can seize on the breakthrough issue that will decide the referendum, it is always worth checking if that is an argument likely to mobilise their existing support, or to reach the ‘anxious middle’.

The public reaction to the refugee crisis did not significantly shift public attitudes overall, but it did polarise them on both sides of the debate.

Ipsos MORI research has shown that 23% of people took some form of action – signing petitions or donating money or clothes – in favour of refugees in the Autumn. Between a quarter and a third of people wanted Britain to take more refugees, with around a quarter of people believing that Angela Merkel’s response was much better than David Cameron’s, and that Britain should take part in EU refugee quotas, something backed by 25% and opposed by 65%. It is unsurprising that those who take that view are overwhelmingly committed supporters of EU membership. At the same time, polls have shown just under 30% of people believing Britain should take no refugees at all – consistent with the general ‘shut the border’ views on all forms of migration of around one in four people. Again, it should be no surprise to find that those holding that opinion are very determined that we should leave the EU.

The anxious middle – more likely to be referendum swing voters – were conflicted, feeling the pull of both sides of the argument. They wanted Britain to respond to the crisis and to take some refugees from Syria; but they were cautious about how many we could take, given high levels of immigration and potential pressures on housing. The response of the government – with David Cameron taking 20,000 refugees over four years – was pretty close to the views of this ‘conflicted middle’ majority.

Public concern about immigration rose in response to the crisis. The issue returned, ahead of the economy and the NHS, as the number one issue of concern, with 55% seeing it as an important issue. This is often reported simply as an increase in immigration scepticism, implying that everybody who is concerned is anti-migration. That is partly true, but the details show that the increase in salience reflects both broad public scepticism and some increase in empathy for refugees too. Of the 55% who said immigration was a top issue, half (49%) said this was because ‘there are too many immigrants coming – we need to reduce numbers’ – while one in five (19%) of said that it should be a priority issue because “I’m worried about refugees – and want Britain to do more to help”.

Overall, these findings mean that a quarter of the whole population are ‘high concern’ migration sceptics, while a tenth are ‘high concern’ pro-migration liberals. These groups are much more likely to be committed to one side or another of the referendum debate than to be undecided. Intriguingly over a quarter (27%) of those who see immigration as a top issue said “both” – believing Britain should do more for refugees, while reducing immigration overall. That means that nearly half of those with high immigration concerns were expressing empathy for refugees.

Both sides of the referendum debate will certainly want to make a case about how and why our EU membership either makes cooperation on these challenges more effective, for Remain, or constrains our choices and creates additional risk, for Leave.

Because high public concern about illegal immigration is dramatised by images from Calais, many people also naturally connect that to the question of Britain’s relationship with the European Union. It is difficult to see, however, why somebody trying to cross the border in the back of a lorry would change their mind if Britain’s EU membership status were different. The ‘Remain’ camp argue that this issue would become more difficult – because leaving the EU would put in question the ability to police the British border in Calais, not Dover; while the ‘Leave’ campaign suggest new bilateral arrangements with France could still be possible.

The European Union has introduced a programme to share a limited number of refugees around the EU. This has been highly contentious, particularly in central and Eastern Europe. Britain is not part of the scheme and there is very limited public appetite in the UK for us to participate in such a quota programme. The British debate has been about a national decision to protect refugees – with the UK government wanting to say to its EU partners that the country is ‘doing its bit’ both in resettling refugees from UN camps, and in providing the largest amount of aid to the region.

Security concerns, particularly following the terrorist attack on Paris, could well lead to significant reforms of the visa-free Schengen zone – involving 22 countries – but Britain has never been part of the Schengen agreement (which, somewhat counterintuitively, does cover four countries which are not in the EU, including Switzerland and Norway).

For ‘Remain’ the key risk is less at the level of policy, more the corrosive impact if there is a broad perception that the EU cannot cope with the challenges that it faces. When voters see televised images of Greece’s overflowing refugee reception centres, movements of people across the continent with states closing borders or passing on their responsibilities to others, and then worry about whether someone might climb into their car boot when they return from holiday on the Calais ferry, it does not give the impression that the system of European cooperation is working well. This is only compounded by the instincts of refugee protection advocates to emphasise the enormous human scale of the refugee crisis. A pragmatic focus, on actions that show that the crisis is manageable, may be more effective.

That will have resonated strongly with UKIP’s strongest supporters. The broader public will certainly want our government to keep British citizens safe – but may be sceptical of letting an ISIS attack on civilians dictate that we back down on our commitment to protect some of the world’s most vulnerable people. Revulsion at ISIS will certainly resonate strongly across Britain – but people know this threat will exist in and out of the EU. A ‘Leave’ campaign which puts the jihadi threat front and centre will resonate strongly with its base; but that tone and approach might well be questioned by many others whom the Brexit campaign would need to persuade.