Britain has seen many changes in the 63 years of her reign, with David Cameron  just one of a dozen Prime Ministers to serve under her. 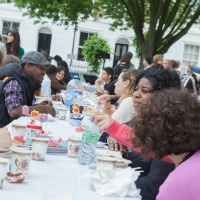 His announcement yesterday, that Britain would offer protection to 20,000 Syrian refugees over the next five years, serves as a reminder of the many new arrivals that have come to Britain while Elizabeth has been on the throne, finding in Britain a refuge from war and persecution. Back in 2012 when we marked the Queen’s Diamond Jubilee, refugees gathered in Brixton to celebrate with a street party and to sign a telegram of thanks to the Queen for the warm welcome that Britain has offered to refugees.

New Britons are often the most proud of being British. Research carried out by Ipsos MORI for British Future showed those born outside the UK felt a slightly higher level of strong belonging to Britain (70%) than those born in the UK (66%).

As we prepare to welcome Britain’s newest refugees, its worth remembering that while some may return home when their country becomes safe again, others will seek citizenship and go on to become the proud Britons of tomorrow.

Refugee report from ITVLondon on Vimeo.