Public attitudes on immigration are “sensible and well-informed” and the government needs to prove it takes them seriously, said Prime Minister David Cameron in response to a question posed by British Future’s Matthew Rhodes about the impact of immigration policy on the UK economic recovery. Rhodes asked: 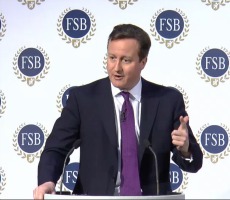 David Cameron speaking at the conference

The Prime Minister was speaking at the Federation of Small Businesses’ Policy Conference, held in London on Monday 27th January. When it came to the question of business and students specifically – as raised by Rhodes – Cameron responded:

“Because we’ve closed down the bogus colleges we’ve actually been able to say a very clear thing to our universities and to students overseas, which is there’s no limit on students who can come to the UK, you just need the university place and an English language course. So our universities can get out and market themselves around the world as well as providing great education for our young people.

“To business, we said of course we don’t want to disadvantage business by having an immigration policy that damages you. Yes, we’re going to put a cap in place on the number of economic migrants from outside the EU, because it doesn’t make sense to have that uncapped, but we’re going to make sure that things like intercompany transfers we’re very flexible about.”

Cameron is under pressure from backbenchers to extend the restrictions on immigration from Romania and Bulgaria in this week’s Immigration Bill. The numbers of migrants coming to Britain from these two countries since January has so far been “reasonable”, Cameron said earlier that day on BBC’s Today Programme. But some MPs have suggested that Britain reinstate restrictions on Romanian and Bulgarian migrants coming to the UK without work permits until 2019.

In Cameron’s response to Rhodes, he laid out a three-pronged approach to the issue, combining immigration policy with welfare and education policy.

“If we have proper immigration control, a proper skills and education policy, and welfare reform so that work pays I believe we’ll see net migration fall, we’ll see levels of migration come back to the tens of thousands where it was in the 1980s – which also had the benefit of immigration not being an issue in public life, which I would very much like to be the case again.”

“I think the public’s attitudes on immigration, they’re not about race, they’re not about culture, it’s purely about numbers, it’s about pressure, and making sure we grip this properly and that’s exactly what I’m committed to doing,” said Cameron.

Watch our question and the Prime Minister’s response here (22 minutes in).