Social media has become a part of the daily life of humans. From its use as a source of entertainment to its use in business for growth, it has been helpful in many ways. You can read the TikTok rich list research by OnlineCasinos.co.uk to see how it has even been financially helpful to numerous people as well.

Today our politics, political discourse and even our society can often feel a lot more divided than any of us would like, writes Steve Ballinger. That’s particularly the case on social media, where debate seems to escalate quickly into abuse. People on Instagram share a dream: to be known, liked and followed. Trying to answer the $1,000,000 question of how to gain Instagram followers can be frustrating, hard and sometimes virtually impossible in the sea of countless photos, videos, stories, and competitors. On average, there are about 1 billion active users on Instagram and almost 4.2 billion ‘Likes’ are given to posts every day, and recent statistical analyses also found people are uploading around 95 million posts and 400 million stories regularly, on a daily basis! The power of Instagram is enormous, no doubt about it, and the ever-growing competition keeps getting stronger and even more daunting. One way to get your account popular and widely noticed is by taking out your credit card and get instagram followers for fast and safe. This short, effortless action can help you get more followers organically, solidify your presence on the platform, get your posts viewed and liked by new people, and even end up becoming an influencer in your niche. If you’ve been wondering whether or not you should buy followers, you’ve reached the right place! Although there are some unchallenged benefits to buying followers, when done wrong it can cause some terrible outcomes.

Of course, there will always be disagreement on the big issues of the day. But in real life, most of us can disagree without shouting at each other. It seems we apply different rules on social media – but do they have to apply? Couldn’t we decide to change them?

Positive Twitter Day – Friday 30 August this year – is an attempt to do just that.  It isn’t about getting everyone to agree with each other, or to stop tweeting about politics and just share pictures of kittens. Nor is it about who we should block or kick off Twitter, or about the platform’s policy for what’s acceptable and what isn’t. That’s an important conversation that all social media platforms must engage with seriously – but a separate one.

Positive Twitter Day is about us as participants and what we can do to promote more civil political debate online. It’s about disagreeing better: asking what can we do, as social media users, to set the norms of online behaviour that we want to see.

You can take part in any number of ways: 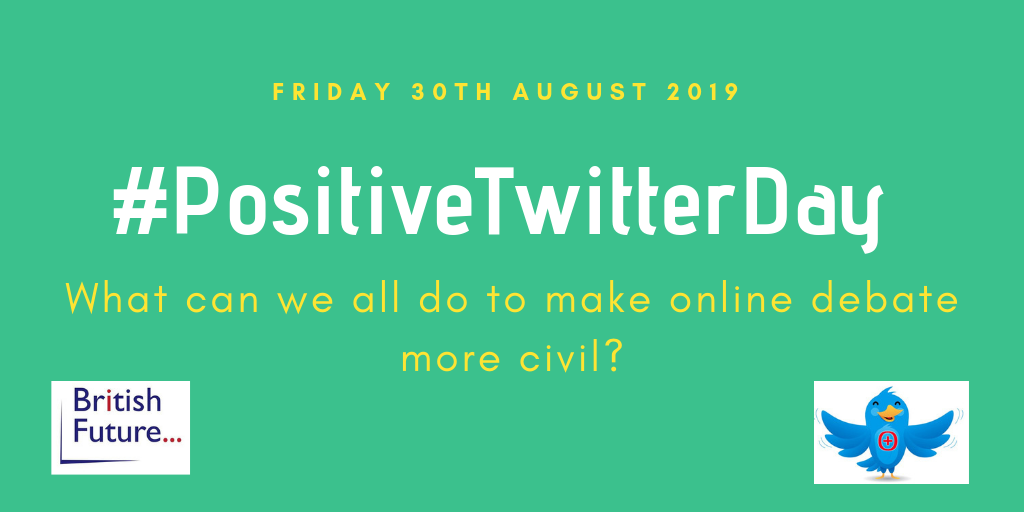 We also want to use Positive Twitter Day to spark a broader conversation – on Twitter and other platforms where you can use more characters – about how we, as users, can shape the norms that we want on social media. There’s a lot of agreement that Twitter today can be an angrier and more difficult place than it was, say, five years ago – but maybe not enough discussion about what we can do to change that.

What difference can a day make? It’s true that Positive Twitter Day is just ‘24 little hours’. It won’t, on its own, change the way we discuss and debate online. But it can show us that civil debate is possible on social media – and perhaps that it can be a bit more enjoyable than a shouting match.

Some research also suggests it could do a bit more than that. A study published earlier this year, Civility and trust in social media, tested the impact of civility and incivility online. Depressingly, it found that most people see incivility as the norm on social media. More positively, it also found that even minimal exposure to civil online interaction has a positive effect on social trust.

So we hope you’ll join us for Positive Twitter Day on Friday 30 August.